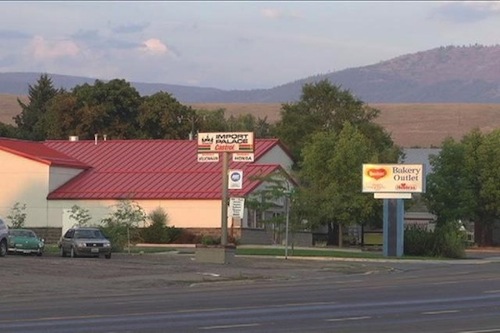 The former Sweetheart Bakery outlet, now back to being an empty warehouse

The Missoula city council voted 10-1 last night to pass an ordinance prohibiting new homeless shelters and soup kitchens for the next six months, or until such time as the city can draft new conditional-use zoning. The ban will be retroactive, with an effective date of August 12. Council members worried that unusual aspect of the ordinance might provoke a lawsuit, but it was necessary to address the real purpose of the ban: preventing the Union Gospel Mission from moving to the former Sweetheart Bakery outlet, which the mission leased and permitted last month. Council heard from approximately three dozen westside residents who opposed the move, in testimony that would have made me think the people of this town were pretty heartless if I didn’t know them already.

Two things struck me about last night’s city council meeting to impose retroactive spot zoning on a charity. The first was how many people I recognized. Lots of my friends live on the west side, which has experienced the kind of general increase in home ownership and property values that people who live in a neighborhood call community improvement and people who don’t call gentrification.

By all accounts, the west side has gotten much nicer over the last two decades. Its southern border continues to abut an ugly stretch of West Broadway, however, that features an adult novelty store, a pawn shop, a liquor store/casino and several cheap motels. A few months ago, a long-empty bar on the same stretch became the site of the new Poverello Center homeless shelter. And last month, the Union Gospel Mission, a private charity providing meals and other indigent services, announced that it had secured a lease for the Sweetheart Bakery a few blocks down.

Westsiders were incensed, and the council’s land use and planning committee moved to block the new mission. Which brings us to last night and the striking features. The first, as you will remember, is how many good, thoughtful west side residents whom I know and like came out to urge the council to pass a retroactive zoning ordinance to prevent the relocation of one soup kitchen. The second is how all of them, except for one, agreed it was very important to provide services to the homeless.

The exception was Cooper Street resident Doug Loskutoff, who argued that “Missoula has a homeless problem because of all the services we offer.” That idea is a horse race between stupid and self-serving, and I leave the reader to handicap it. Every other westside resident who testified during the hearing agreed that we must do something to help the inordinate number of homeless people in Missoula—it’s just that they have two young daughters, or they recently renovated their home, or they’re worried about crime, and not all homeless people are thieves and child molesters, but…

The public hearing portion of the evening surpassed 90 minutes. In addition to many, many westside homeowners, it included testimony from a half dozen staff, volunteers and clients of the Union Gospel Mission, who pointed out that UGM is a private charity that receives no funding from the city and legally secured the lease and permits for its new location. The overwhelming majority of community speakers, however, agreed that what the mission does is great and that they supported its efforts to do it anywhere but in their neighborhood.

After an hour and a half, their reasoning seemed incontrovertible. Why shouldn’t residents have a right to determine which businesses can occupy an adjacent commercial zone? Why shouldn’t an indigent services charity consider how the presence of its clients might impact nearby property values? As councilman Dave Strohmeier put it, “We want to help people, but not at the expense of hurting others.”

And so the council voted 10-1 in favor of helping westside homeowners. At a meeting where almost every person agreed that we must do something to help the homeless, it passed a citywide, retroactive ordinance banning new homeless shelters and soup kitchens, in order to prevent one particular private charity that helps the homeless from leasing a new space.

There is no doubt in my mind that the westside residents who spoke at last night’s council meeting care about the homeless. When a local parole officer asked who among those present would commit to helping Missoula’s neediest, just about everyone stood up. Then the council passed the proposed urgency measure, and everyone but me and the guy who covers council for the Missoulian left.

It was a victory for people who own houses. It was a stirring example of community action and responsive city government, and in theory it was a unanimous declaration of support for homeless services from the people of Missoula’s west side. Now the people who feed the homeless can look for another place to do it.