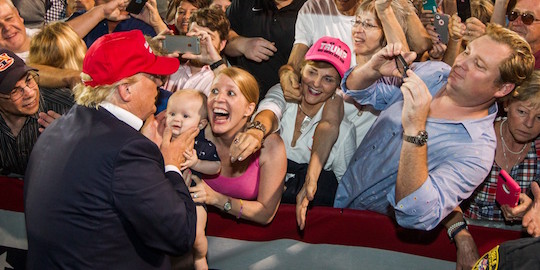 Enough votes to cancel out everyone you know

Donald Trump is the worst major-party candidate in modern history. He stops spouting nonsense only to lie, and his lies contradict one another. You’d have to be stupid to vote for him, which is weird, because he obliterated 15 other Republican candidates in the primaries. But that was the GOP, where the stupid enjoy a plurality. Now that we’re basically into the general, Trump’s idiot supporters are overwhelmingly outnumbered by those of us who look down our noses at them. That’s why Hillary Clinton enjoys an insurmountable two-point lead in the polls. It’s also why this satirical report by Andy Borowitz, Stephen Hawking angers Trump supporters with baffling array of long words, is so hilarious.

Agreed that “baffling array” is an inherently funny phrase, which is probably why it verges on cliché. I suppose it’s also funny to dismiss Trump voters as morons who don’t understand the sophomore-level vocab words we do:

Speaking to a television interviewer in London, Hawking called Trump “a demagogue who seems to appeal to the lowest common denominator,” a statement that many Trump supporters believed was intentionally designed to confuse them. Moments after Hawking made the remark, Google reported a sharp increase in searches for the terms “demagogue,” “denominator,” and “Stephen Hawking.”

Ha! Those stupid assholes look up the meanings of words they don’t know. Can you believe they didn’t know them already? Wait, I feel weird. It seems the path of our satire has intersected a swifter vehicle.

If you want Clinton to beat Trump in November, a person who currently thinks he would make a good president is like someone who doesn’t know what the word “demagogue” means. You can laugh at him for not knowing and thereby convince him it’s the kind of word assholes use. Or you can hope he looks it up—even encourage him to do so or, if you really consider yourself a deft hand, explain to him what it means. Then maybe he will start using “demagogue” too, instead of  hating you.

Saying Trump appeals to stupid people is not the first step to winning over his supporters. Hillary already fights the impression that she’s smug, living a life ordinary people cannot imagine, and married to a president. Two out of those three are true. Perhaps the best way to counter the popular appeal of a charismatic huckster is not to work the “you rubes” angle. That’s how you play the heel in Memphis.

I do think Trump appeals to common denominators, and I don’t want him to win in November. I sure would feel better about the slim lead standing between me and President Trump if it were larded by a few points—possibly one or two percent of Trump supporters. I guess we can hope to lure them with our disdain.