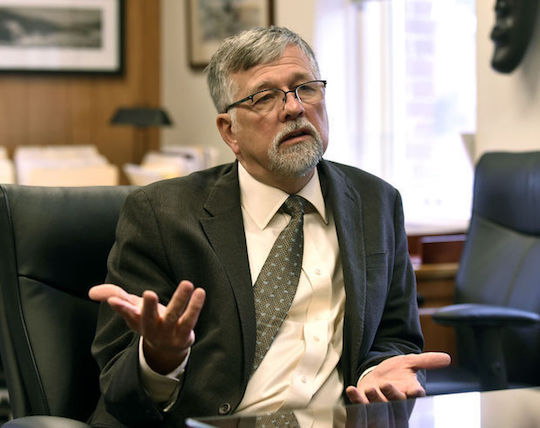 During the five years Royce Engstrom has served as president of the University of Montana, enrollment has fallen by almost a third. Last week, the College of Humanities and Sciences announced cuts of 30% to its teaching budget and 50% to its operations. The last five years have seen a federal Department of Justice investigation into the university’s handling of sexual assault, the publication of a book titled Missoula: Rape and the Justice System in a College Town, and the payment of a $245,000 settlement to former quarterback Jordan Johnson. Meanwhile, the Montana Associated Students has named Engstrom its 2016 Administrator of the Year.

At first I thought they were being cruel. But MAS really means it: they gave Engstrom the award for how well he has handled the process of “realigning the workforce so that the budget reflected the institution’s current enrollment.” Essentially, he has been publicly commended for overseeing the collapse of the university.

That collapse may not be Engstrom’s fault, but it has coincided with his tenure. Enrollment was at a record high when he took office. He may have inherited many, many scandals related to sexual assault, but he also was in charge during the botched investigation for which the university just paid Johnson a quarter million dollars. If Engstrom is the best administrator in the state, who was the second best? And what meteor were his students crushed beneath?

You can read smart remarks such as these in this week’s column for the Missoula Independent. I don’t want to be too hard on Engstrom, because many of the problems that have blossomed during his administration were planted in previous ones. Still, we should not pretend that the University of Montana is in a good position right now. Nor should we tell ourselves that it is being run well when it continues to fall apart.