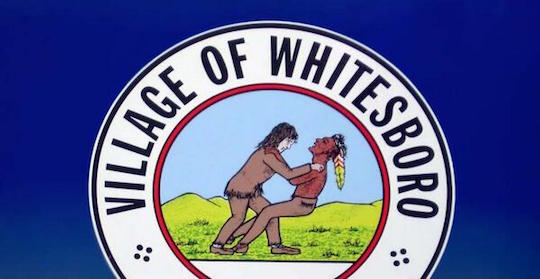 The controversial official seal of the village of Whitesboro, NY

When I first saw an article claiming that residents of Whitesboro, New York would vote on whether to change their official town seal, pictured above, I assumed it was heavy-handed satire. The name “Whitesboro” is obviously made up, and even if it weren’t, there’s no way any town would adopt as its official seal an image of a pioneer choking an Indian to the ground. Satire should be a little absurd, but it can’t be completely on-the-nose like that. Maybe if you made a seal showing pioneers eating at a big table while hungry Indians peeked in from the background, maybe that would work. But then I checked the mostly reliable New York Daily News, and it turns out Whitesboro is an actual place with that actual seal.

If you’re not used to looking at it, the overall effect is kind of unsettling. The name “Whitesboro” conveys one main idea, and that idea is reinforced by the image of a white person forcing a non-white person to the ground. It’s hard not to look at that seal and get a clear sense of what Whitesboro is all about.

But that sense is misleading, at least according to the village website. Citing an origin of the seal prepared by the First Historical Club of Whitesboro1 for the village’s sesquicentennial, the website reports:

An incident that occurred between an Oneida Indian and [village founder] Hugh White sealed a lasting friendship and confidence. An Oneida Indian of rather athletic form was one day present at the White’s house with several of his companions and at length for fun commenced wrestling. After many trials, the chief became conqueror and he came up to Hugh White and challenged him…He accepted the challenge, took hold of the Indian and by a fortunate trip, succeeded almost instantly in throwing him. As he saw him falling, in order to prevent another challenge, he fell upon the Indian for an instant and it was some moments before he could rise. When the Indian finally rose, he shrugged his shoulders and was said to have muttered “UGH, you good fellow too much.” Hugh White became a hero in the eyes of the Oneida Indians. This incident made more manifest the respect of the Indian for White.

You know you’re reading an absolutely truthful historical account when Indians start their sentences with “ugh.” And what better way to make manifest the respect of an indigenous population than by throwing one of them to the ground? “They respect us because we smash them” is the ethos of a bygone era.

What we have here is an example of the kind of story white people used to feel good about but now realize kind of makes us look like genocidal conquerers, which is of course what we were. By “we,” I mean the people of roughly the same skin tone as us who lived 200 years ago. It’s a fairly misleading use of the word, which is why we should probably do away with the increasingly antiquated concept of race and, while we’re at it, official town seals that depict a member of one “race” choking a member of another “race” to the ground.

But what we really need to do is stop reality from annexing territory that has belonged to satire for generations. The loss of satire’s birthright to actual events is already putting pressure on traditional artisans like Andy Borowitz, who struggle to construct humor using the tools of their ancestors in a modern, globalized marketplace where consumers too often insist on actually laughing. The more towns like Whitesboro expand into their territory, the more difficult it will be to surprise people with satirical humor. Frankly, reality is a poor substitute, even if it produces the occasional hit.