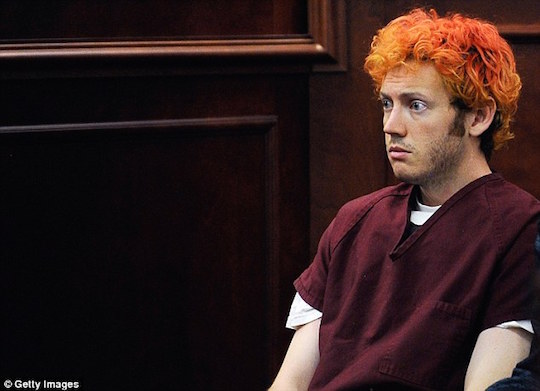 A therapist friend first suggested this idea to me in 2009.1 People such as Holmes or Michael Hayes who kill large numbers of strangers sometimes argue that they are innocent by reason of insanity—a notoriously difficult defense that juries tend to resist. Insanity, like any mental state, is difficult to prove from the outside.

But what sane person would try to kill 80 people he had never met? Holmes’s actions are difficult to square with our conventional understanding of murder and motive. He certainly did not benefit from his crime. He did not know any of his victims personally, so it’s hard to argue that he killed for passion or revenge. As the bomb in his apartment suggests,2 whom he killed seems not to have mattered to him. He just wanted to kill people.

It’s not as though his crime were a heist gone wrong. He certainly seems to have planned it in advance, but it’s hard to imagine how he might have expected to get away with it. Holmes plotted a self-destructive act of senseless violence against strangers, and its only upside seems to be that he got to kill. That plan would only appeal to two kinds of people: insane and evil.

I submit that our concept of “evil” is shifting and permeable, to a degree that suggests it is another word for insane. The claim that Holmes is evil seems to explain why he considered killing an inherently desirable act, but we have little evidence that killing made him happy.

The AP reports that his life was in disarray in the weeks before he committed his crime. He had withdrawn from his doctoral program after losing the confidence of his teachers and colleagues, and he appeared to be drinking heavily. If he was evil—if his deontology had become inverted in such a way that he found inherent good in acts normal people find inherently repellant—opening fire on a movie theater would arguably be the crowning achievement of his life. But Holmes seems to have committed this quote-unquote evil act when his life was falling apart, not when he was getting it together.

Nothing else in Holmes’s life during the summer of 2012 reflected the triumph of his will, so why should we say that this self-destructive outburst of senseless violence did? The only reason we have to believe that Holmes was evil lies in what he did. But if we say that he’s evil because he did it and he did it because he’s evil, we’re essentially admitting that we don’t understand what motivated him.

I don’t think Holmes understands what motivated him, either. That’s probably because there is no good reason for a person to shoot a bunch of strangers in a movie theater. When you think about it, our society is extremely vulnerable to that particular crime. But we don’t guard against it, for the same reason that we don’t put key codes on our electric pencil sharpeners to keep people from putting their fingers in there. No sane person would do that.

I bet the electric pencil sharpener at the mental hospital is somewhere patients can’t get to it. Society frowns on two broad categories of behavior: one that benefits the actor at the expense of others, and one that doesn’t benefit anybody. We call the first category crimes. The second encompasses mistakes, laziness, and acts of the insane. In the second category, behavior determines the condition, and not the other way around.