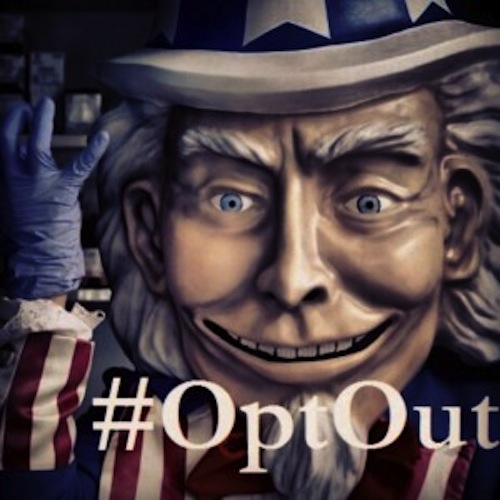 What’s really creepy is the combination of photograph and illustration.

In the comments section of yesterday’s post about Generation Opportunity’s campaign to get young people to “opt out” of Obamacare by not buying health insurance, Myeh posted a link to this Craigslist ad for a “patriotic but weird Uncle Sam.” The ad seeks a male with “street theatre experience” to wear the Sam costume for a “conference of young activists” in Chantilly, VA. Sure enough, Generation Opportunity is based in Virginia, and they’re launching a tour of 20 college campuses later this month. Their message? The individual mandate doesn’t mean that you, individually, have to get health insurance. You’re better off getting nothing and paying the fine.

First of all, don’t take a job that requires you to wear a costume and pays $275 for two nine-hour days. That’s just over $15 an hour, and I suspect they don’t offer benefits. Second, the GenOpp campus campaign is designed to counter the numerous activist groups, such as EnrollAmerica, that are encouraging college students to sign up for state insurance exchanges. All Generation Opportunity wants to do is inform students about the pluses and minuses of getting health insurance under the Affordable Care Act.

“What we’re trying to communicate is, ‘No, you’re actually not required to buy health insurance,’” Generation Opportunity President Evan Feinberg said. “You might have to pay a fine, but that’s going to be cheaper for you and better for you.”

That’s a pretty loose construction of “you’re not actually required to buy health insurance.” Buying health insurance is not a requirement in the same sense as, say, falling toward the center of Earth when nothing is under you, but it is mandated by law. And while the $95 fine is cheaper than health insurance, it is maybe not as valuable from a services-per-dollar perspective.

Feinberg declined to say how paying a hundred bucks to get nothing was better for college students than paying several hundred bucks to get health insurance. In this case, “better” may refer less to personal well-being than to broad societal outcomes, possibly related to freedom. So let’s examine some outcomes using this handy chart:

Contrary to what your girlfriend says about astragalus, that mechanism does not exist. The next best thing, from a societal standpoint, would be to mitigate the effects of sickness in such a way that, yeah, people still coughed or had Hodgkins lymphoma or whatever, but they got the proper treatment and its cost was already paid, or at least built into the health care/insurance economy.

The individual mandate is, from one perspective, a grotesque imposition on personal freedom. From another perspective, though, it is an attempt to get everyone who participates in the American health care system to acknowledge that they personally can get sick.

When a 27 year-old breaks his leg and can’t pay his emergency room bill, the rest of us pay for it just as much as when a 47 year-old does that. The difference is that the 27 year-old is A) more inclined to prioritize short-term savings over long-term safety and B) less likely to have money in the bank when that decision backfires. Young people may be less likely to get sick than everybody else, but they’re also more likely to be uninsured and in worse financial trouble when they do.

So again we cannot escape the sensation that Generation Opportunity is spending $750,000 to do something bad for society. It’s bad to convince young people not to buy health insurance. It’s bad for the other people in the risk pool, who have to pay higher premiums right away and, probably, more for urgent care down the line. It’s bad for the college students themselves, a certain percentage of whom will suffer financial catastrophe when they get sick.

And whom is it good for? In a broad sense, I suppose it’s good for the Republican Party, since they might see the dread Obama humiliated on a national-historic stage. But even that seems like a petty victory. The Affordable Care Act passed three years ago. It’s as if Napoleon, three years after the Battle of Waterloo, spent a million dollars encouraging French people to contract typhus and cough on the Duke of Wellington. There must be some angle to convincing young people to make bad decisions that hurt the country in order to humiliate a lame duck President, but I cannot see what it is.