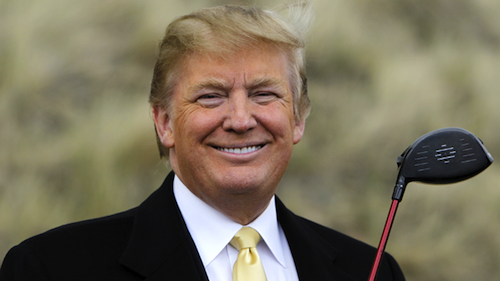 Donald Trump and the classiest fuckin' golf club in the world

Those of you looking to divide the Republican Party into old and new need look no further than the public feud between George Will and Donald Trump, whom Will called a “bloviating ignoramus” on television Sunday. Trump responded that Will “may be the dumbest political commentator of all time,” and Will admitted that he was wrong and retired. No, wait—that second part didn’t happen. Instead, Trump flew to Las Vegas and participated in a fundraiser for Mitt Romney, where Romney stood next to him and tried to imply that Trump was dumb with his eyes. The Republican nominee also announced that he “accepts” that President Obama was born in the United States.

That’s the kind of thing you have to do when you get Trump money. The periodic billionaire continues to insist that Obama is not a natural-born citizen and therefore disqualified from being president, a position he arrived at by weighing the evidence presented in the long-form birth certificate and testimony of Hawaii officials against what somebody told him once. Worse, the birther “issue” has kind of become Trump’s whole thing. After even Orly Taitz has returned to Chili’s to slumber and feed, Trump continues to indulge the absurd fantasy that Barack Obama cannot legally be president because you can’t disprove a negative.

Fortunately for Romney, Trump’s money does not have this view printed on it. As the headline of the Times article reminds us, the nominee can accept funding from Trump without accepting his message. This truism complicates the claim, central to  the Supreme Court’s ruling in Citizens United v. FEC, that campaign money constitutes a kind of speech. For simplicity in this argument, I think it’s safe to say that Citizen Trump’s fundamental message is that Barack Obama was not born in the US. Whether or not he’s saying it just to get attention, that claim is his whole damn raison d’etre. Yet Romney can easily take the money Trump raised making that claim and run a presidential campaign that actively disavows it.

Money is fungible, in other words. Where speech is contextual, money is not. The fact that the same money can be spent in service to opposite messages is another indicator that speech and cash are incommensurable—so, you know, more evidence for the position already held by everyone in America except five guys. If you are more of an instrumentalist, however, and prefer to evaluate the reason or unreason of Supreme Court decisions based on their practical consequences, consider for a moment that the richest man ever to run for President still feels compelled to give a public forum to an obvious idiot in exchange for money.

That seems to be the terrifying consequence of Citizens United v. FEC—not that money is speech, but that money replaces speech. Donald Trump is apparently a kingmaker in the Republican Party now, despite nearly everyone disagreeing with him. Even to a candidate so rich that his stated objective in the general is to convince voters that he is a normal person, Trump’s value as an income source outweighs what he says. Ergo, he gets to keep saying it.

That’s fine, provided you believe that the sole purpose of a presidential election is to determine the next president. If that’s the case, then who cares what Romney’s supporters say? He amassed them, and he gets their resources to try to win. If, however, you believe that the general election is an opportunity for national discourse on ideas and problems that are important to Americans, Trump is disturbing in the extreme. He represents a future in which the marketplace of ideas is just a marketplace, where concepts survive and are taken seriously based on the purchasing power of the person who advances them.

You can’t run a country like that. As the old saw goes, wealth retards, and absolute wealth retards absolutely. Donald Trump is a bloviating ignoramus because his resources allow him to be. Before we decide to treat money as ideas, we might consider the effect of that equivalence on those who already do.