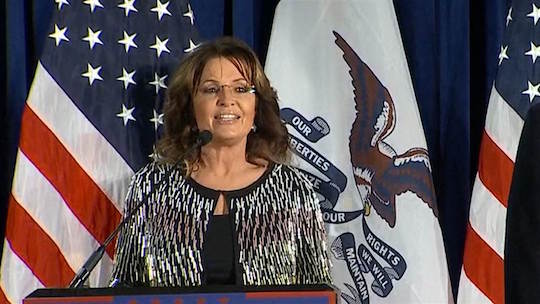 Do not read it aloud or you will summon her, but the full text of Sarah Palin’s endorsement speech for Donald Trump is here. Props to Smick for the link. Palin’s style has always worked better in speech than it does in print. More than one journalist has complained that the hardest part of transcribing her is knowing where to put the periods. She hews to a verbless, pastiche style reminiscent of Allen Ginsberg, if Ginsberg worked primarily in cliché. What is most striking about Palin’s speech from last night is the way it swings from phrase to ready phrase—in it to win it, drill baby drill, failed agenda, lead from behind, we the people and, now, make America great again—much as Tarzan swings from vine to vine. She’s just hollering in the spaces between. Still, certain themes emerge. Video after the jump.

First of all, watching Trump stand awkwardly onstage next to her is extremely entertaining. Again we find proof of the John Cleese principle: comedy is not watching someone do something funny; it’s watching someone watch someone do something funny. What Palin is doing here, mostly, is careening. She’s clearly prepared these remarks, but she hasn’t exactly memorized them. In this way, her style of oratory resembles Trump’s, but with shrieking instead of honking.

Her primary theme is that a powerful establishment wants to stop her, Trump, and by extension everyone in the audience. She begins by attacking the press, whose “heads are spinning,” presumably because a charismatic front-runner who says reckless things every day is a newsman’s worst nightmare. But the media establishment that hates people like Palin and Trump so much it’s made them famous is mirrored by another, more sinister specter: the Republican establishment.

But for the GOP establishment to be coming after Donald Trump’s supporters even, with accusations that are so false. They are so busted, the way that this thing works. We, you, a diverse, dynamic, needed support base that they would attack. And now, some of them even whispering, they’re ready to throw in for Hillary over Trump because they can’t afford to see the status quo go, otherwise, they won’t be able to be slurping off the gravy train that’s been feeding them all these years.

Palin does not dignify these false accusations by saying what they are. The important thing is that (A) criticism of Trump is false, and (B) it is spread by a conspiracy of reporters and political operatives. This is Palin’s brand. She is selling the conceit that social conservatives—churchgoers, stay-at-home moms, “farm families,” and aging “rockin’ rollers”—are rebelling against a powerful establishment, and that establishment is liberal.

It’s an inversion of the values of the 1960s, and if it is counterintuitive—how do going to church and deregulating fossil fuels threaten the system, exactly?—it only frees her up for greater implausibility. For example, she praises Trump’s “quiet generosity.”

But, it’s amazing, he is not elitist at all. Oh, I just hope you guys get to know him more and more as a person, and a family man. What he’s been able to accomplish, with his um, it’s kind of this quiet generosity. Yeah, maybe his largesse kind of, I don’t know, some would say gets in the way of that quiet generosity, and, uh, his compassion, but if you know him as a person and you’ll get to know him more and more, you’ll have even more respect.

Putting aside the question of whether he is generous, I don’t think anyone would say Donald J. Trump is quiet. I also don’t think “largesse” means what Palin thinks it means. Agreed, however, that his five children with three different wives amply qualify him as a family man.

But the important contention here is that Trump is not an elitist. It’s a startling claim to make about a billionaire who was born a millionaire, went to private school, erected a series of buildings with his name on them, got his own television show, and went on to run for president while calling other candidates for president “losers.”

But again, this is Palin’s central message: media elites and elected representatives don’t understand you hard-working, ordinary people. Only celebrities do. This worldview does not comport with the facts of Trump’s and Palin’s lives, and so it relies on willful denial of fact in favor of feeling. It’s not about what’s true. It’s about what’s right:

Trump is ready to stop the race-baiting? Did he confer with Palin on her way to the podium and tell her something the rest of us don’t know?

He didn’t have to. He and Palin are in the same business, and they know the rube vote is the same from Staten Island to Alaska. It’s the huckster’s big secret: “our kind of people” means the same thing to all  different types of assholes.