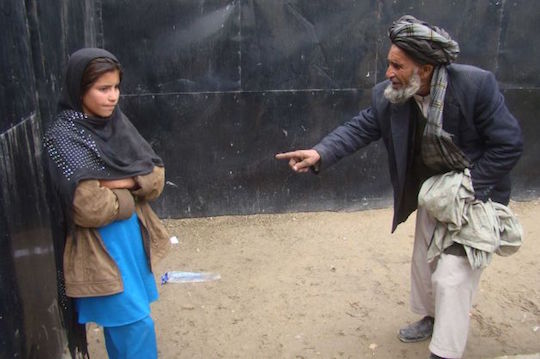 A father addresses his daughter at a women’s shelter in Afghanistan.

I don’t mean to bum you out, but you should read this incredible article about women’s shelters in Afghanistan, a relatively recent product of Western influence. Honor killings are alarmingly common in the provinces, where resources are scarce, small communities make family reputations important, and a daughter of marrying age is a valuable commodity. The Times piece describes several women who eloped and sought protection from their own families in women’s shelters—including Faheema, whose stepmother burned her face with acid and whose father makes it clear throughout the article that he intends to kill her. Then, near the end, we get this:

Faheema tried to make peace between their two families and braved a phone call with her angry father to beg him to meet with elders from [her husband] Ajmal’s clan. But her father refused to see them and said the only thing that would satisfy him is if they gave him a daughter to marry off to his son or nephew in exchange for Ajmal’s taking Faheema.

That’s the only thing that can keep him from murdering his daughter: fixing up his nephew. Our plan was to teach this man democracy.

What kind of value system is that? I am enraged; my family is ruined; the only thing that can keep me from murdering my daughter is a new Ford pickup. I must kill my child with my own hands, unless I get a nice reuben.

What is spectacularly alien about this system of moral reasoning is not what it values so much as what it considers equivalent. For this man and, apparently, the culture in which he lives, selecting whom his daughter marries is more important than her continuing to live. Yet while this tradition is more important than the prohibition against murder, it is evidently less important than finding a nice girl for his nephew.

I do not mean to suggest that the Afghan people are backward or fundamentally unprepared for modernity. The value system described in this Times article, however, is absolutely backward and incompatible with modernity. It is a bad culture. I don’t think the families caught up in it are bad people, exactly, but their system of moral reasoning is stupid and evil, at least as it pertains to this issue.

Probably, when 300 generations of people live in the desert and/or mountains with very few resources and only one another to rely on, that’s the kind of ethics you come out with. It’s no more appropriate to judge Afghans for their attitude toward women than it is to judge men in India for wearing dorky shirts. We inherit our culture. It is thrust upon us in the same way as our history. From most perspectives, it is our history.

Also I don’t know anything about it, except for this one spooky article I read in the Times. It’s kind of amazing, though, that a whole State Department and Pentagon full of people who presumably knew a lot more than I do determined that we could turn Afghanistan into a democracy in, like, a year. Nothing can slake my rage at the neoconservative adventurism of the George W. Bush administration, unless they start making new episodes of Community.