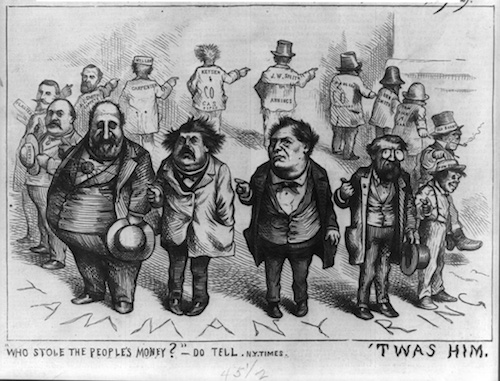 It’s actually okay if you give up politics, my yellow Furmericans, because politics have given up on you. Two Princeton researchers have published a study arguing that America resembles an oligarchy more than a democracy. After an exhaustive statistical comparison of 20 years of policy initiatives and public opinion polls, Gilens and Page found that “the preferences of the average American appear to have only a minuscule, near-zero, statistically non-significant impact upon public policy.” PolicyMic can’t decide whether the wealthiest 10% of Americans straight-up dominate the country or if we enjoy “biased pluralism,” a system where various interest groups use money to vie for control of particular issues.

The important thing is that it’s finally okay to be rich again. Over at the Times, the baroquely-named Anand Giridharadas has pointed out that Seinfeld’s new show is more socioeconomically problematic than his last one. Where the cast of Seinfeld were sitcom middle-class, with improbably large living rooms but otherwise ordinary resources, the Comedians in Cars Getting Coffee are multimillionaires. George mad at Kramer for never picking up a check is somehow funnier than Alec Baldwin leaving a $1,000 tip because he was such a dick to the waitress. Fun structural consequence of reality television: our narratives are about famous people.

Except for the other reality shows, which are about rednecks—take Cliven Bundy, for example. His refusal to stop grazing his cattle on federal land—because, as he put it, “I don’t recognize the United States government as even existing”—has attracted the support of militiamen across the west. Too bad his express obedience to the laws of Nevada means he acknowledges the supremacy of the US government, too. It’s almost as if Bundy’s 30-year insistence on grazing his cattle for free is rooted less in constitutional scholarship than in some kind of personal fiduciary interest. But to believe that, you’d have to believe that libertarian politics have been corrupted by money.

You know what has been completely corrupted by money, or at least website hits? Satire. Something called The News Nerd has released the story Leonardo DiCaprio Cast as MLK in New Film, Will Wear Blackface. The dodge here is that it’s a joke, but it’s not a ha-ha joke so much as a click-on-it joke. I guess that’s called a hoax. The News Nerd is currently the object of a lawsuit from Aretha Franklin over an article it ran about her assaulting Patti LaBelle. I quote Franklin’s public statement:

The stories were not presented as satire or humor. It was presented as a serious news story intended to depict me in a slanderous and derogatory way —defamation of character.

Finally, a court will decide how funny something has to be to count as satire. Compare The News Nerd’s transparent clickbait to The Underground Magazine’s not tremendously funny but clearly satirical Man ruins Game of Thrones with series of novels full of spoilers. Economy, you guys. But at least you present as humor, even if you cannot touch the masters.

That’s the other thing the American oligarchy does: two simultaneous ten-year land wars, then retire. It’s almost enough to make you turn to the old verities: