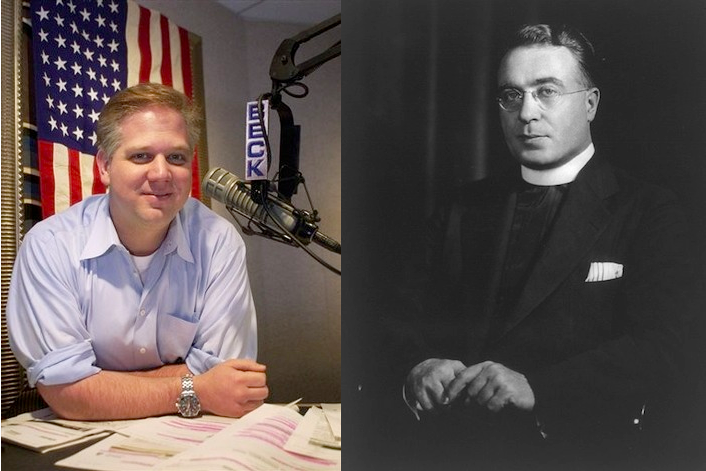 In this way he appears to be the ghost of Father James Coughlin, the enormously popular and vaguely insane radio host of the 1930s. Coughlin rose to prominence as a supporter of Frankling Delano Roosevelt and the New Deal, but quickly became one of FDR’s sharpest critics. By 1934 he was a populist demagogue, advocating for the common people against an imagined conspiracy controlled by Roosevelt, Wall Street capitalists and “Jewish conspirators.” He advocated heavy taxation of the wealthy, government control of major industry and limitations on private property, but excoriated the “godlessness” of communism. He eventually expressed cautious support for the fascisms of Hilter and Mussolini as an antidote to Bolshevism, and by 1938 he was defending Kristallnacht.

Glenn Beck seems a far cry from that, and he’s certainly never claimed that “Jewish persecution only followed after Christians were first persecuted.” (Then again, there’s this.) Ours is a different age from Coughlin’s, and Beck has the sense not to pin his career to anti-Semitism or some other fortunately obsolete mode of populist thinking. When it comes to totalizing theories not relegated to the trash bin of history, though, Beck has embraced much of Coughlin’s platform wholesale. Here’s Coughlin on Roosevelt’s New Deal, attacking government reform and the objects of that reform in one stroke: “Roosevelt has a poor brand of Russian communism … I think it is significant the leaders among the communists of the world never once attacked international bankers. Roosevelt will not touch that subject.”

Like Beck, Coughlin makes a straw man of powerful financial interests (though to be fair, “international bankers” is, in Coughlin’s argot, also a euphemism for “Jews”) while simultaneously branding attempts to regulate those interests as communist. It’s a political position that is simultaneously anti-socialist and anti-capitalist, positioning big government, big business and Bolshevism as the looming enemies of “the people.” Coughlin’s American people—hard-working, Christian, and commonsensical—are remarkably similar to Beck’s, and they enjoy a similar authority. “The people have spoken,” Coughlin was fond of saying, “and the only American thing to do is abide by the will of the people.” For Coughlin and for Beck, the only real source of wisdom in America is the chimerical Common Man, who is identified primarily as a regular listener to their shows.

Those regular listeners numbered a third of the country at the height of Coughlin’s popularity. Compared to Coughlin’s 40 million, Beck’s television audience is only estimated at three million, and counting. People are not as desperate now as they were during the Great Depression, and hopefully not as dumb, either. To a certain degree, however, they seem equally willing to throw their support behind a man who is against everything but God, country, and the people to whom he is speaking. It’s an utterly vapid platform, useful for nothing but garnering a larger ratings share. That men like Beck and Coughlin keep emerging to offer it to us as though it were a solution is troubling, but in a way it’s comforting, too. I’m not sure exactly what Glenn Beck is, and that bothers me, but at least I know we’ve seen him before.