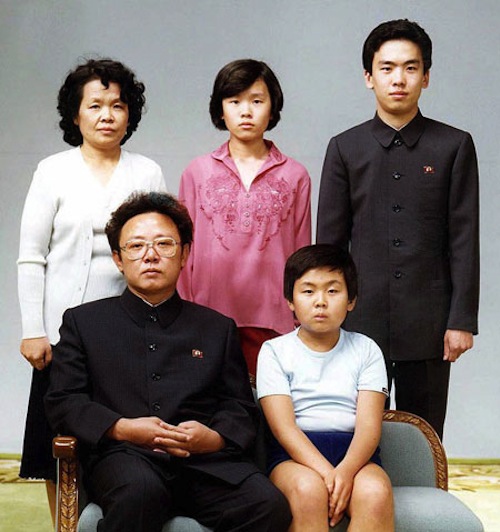 Kim Jong Il poses a problem. On one hand, he is an aggressive dictator, incrementally starving his people so he can continue to destabilize the rest of south Asia. On the other hand, he is hilarious. Look at him up there with his terrifyingly normal family in 1981, teasing the camera with some sort of Warren Beatty facial expression. The only person in the picture possibly more awesome is the child sitting next to him, who, as soon as the shutter clicks, will lunge forward and strike the photographer in the groin. He is Kim Jong Chol, and thirty years after this picture was taken, he will not get to run North Korea. Thirty years after this picture was taken, his father’s escaped personal chef will tell Chosun Ilbo that Jong Il can often be heard to say, “The big one has a weak heart and is feminine, but the young one is manly.” Props to everyone’s favorite Meghan Gallagher for the link.

The young one is Kim Jong Un, presumptive heir to the dictatorship for reasons described in the pleasingly-titled Furry Hat Offers Clues to Progress of North Korean Succession. He loves “nukes, computer games and Johnny Walker,” and sometime between when Kim Jong Il gets really crazy and when he spits a gout of blood on his mistress and keels over, he will assume control of the fourth largest standing army in the world.

That’s scary, but North Korea is like a man swearing at you from a wheelchair: creepy and unpleasant, yes, but not precisely threatening. The radius of Kim Jong Il’s destructive power seems primarily centered on his own family. No one knows exactly what happened to the older boy in the picture above, Kim Jong Nam, although Wikipedia tells us that “following a much-publicized, botched attempt to secretly visit Japan’s Disneyland in May 2001, he was thought to have fallen out of favor with his father.” His middle brother seems to have become a character in a Monty Python sketch, as “kim jong chol gay” keeps popping up in my Google autofill, and his father describes him as weak and womanly “in front of top officials.”

Meanwhile, Kim Jong Un gets to visit Tokyo Disneyland with his mother in like 2003. And wear a furry hat! Even if Kim Jong Il never gets weapons of mass destruction, he has developed the technology to melt people’s personalities one at a time. Who knows how Kim Jong Un will run North Korea, having grown up the favorite of a megalomaniac dictator who gave him whiskey and nude ballet performances and four-star generalships and trips that recreated the greatest mistake of his older brother’s life, but I bet he will be awesome.