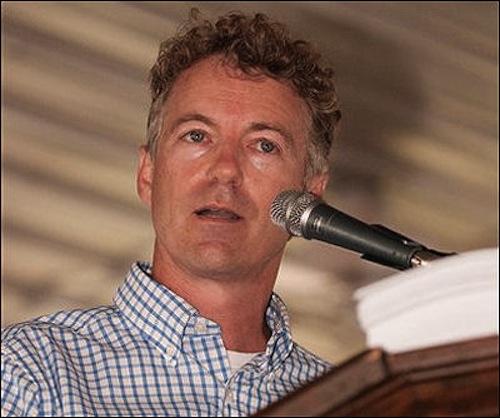 And they wouldn't let them eat there? Even though that cut into profits? Sorry, that just doesn't sound right.

Good news, everybody! Non pixel-mosaic photographs of Rand Paul are now available on the internet. As usual, “good news” is shorthand for “good news for everybody except for Rand Paul,” since the sudden ubiquity of his image is due to his briefly held and brutally corrected position on the Civil Rights Act. In his first dive into public discourse, Paul executed a series of contortions before landing on his neck, becoming only the third person ever to cancel an appearance on Meet the Press. Rand Paul has met the press, and they are dicks. All he wanted to do was make a generalized point about his political views, and everybody treated him like he was talking about applying those views to specific laws. Can’t a man run for the Senate in peace?

The injustice of the situation is not lost on Sarah Palin, who can’t help but notice the similarities between Paul’s treatment at the hands of various gotcha journalists and her own.*

Palin’s remarks so clearly articulate the warm heart of this hyperactive fiasco that they merit quoting at length. If you are using Combat! blog to program a computer to understand human syntax, don’t let it read the next sentence:

One thing that we can learn in this lesson that I have learned and Rand Paul is learning now is don’t assume that you can engage in a hypothetical discussion about constitutional impacts with a reporter or a media personality who has an agenda, who may be prejudiced before they even get into the interview in regards to what your answer may be—and then the opportunity that they seize to get you.

I was this close to launching a blog this morning dedicated entirely to diagramming sentences uttered aloud by Sarah Palin, but I’ve decided to work on dating first. Still, like a chocolate-covered cricket, there is something at the center of Palin’s useless mouthful that used to be alive. “Don’t assume that you can engage in a hypothetical discussion about constitutional impacts,” is the lesson Palin has learned. Like Paul, she learned it in the context of a political campaign, where hypothetical discussions tend to turn practical with alacrity.

Ironically, she feels it’s the reporter “who has an agenda” when she and Paul are asked to apply their political ideas to real-world situations, when that is in fact the agenda implicit in running for office. We need to engage in a little gotcha journalism with Rand Paul, lest he arrive at the Senate and begin gotcha governance. Asking him to translate his devout, theoretical libertarianism to things like civil rights and oil company regulation is the natural function of the American electoral process. It’s how we separate our politicians from, say, our Fox News commentators.

It’s also what makes Paul’s candidacy a symbolic referendum on the validity of the Tea Party—and, to a lesser extent, on contemporary discourse in general. As an anti-government firebrand who believes that the Federal Reserve and many other manifestations of the modern United States are unconstitutional, Paul may belong to that great tradition known as Just Sayin’ Stuff. It’s no coincidence that he has found his natural home in the Tea Party, a movement that has thus far preferred objection to activity. Paul’s attempts to translate his reactionary populism into positions on real policies mirror, in many ways, his supporters’ attempt to go from yelling outside the post office to concretely influencing American politics. More than health care, more than Scott Brown in Massachusetts, this is our chance to see whether the Tea Party is a real thing.

So far, it isn’t going well. The Rand Paul campaign is young, but it’s already foundering on the shoals of the actual United States of America. Perhaps Rachel Maddow was unfair to impose the full force of logic on his ideas in the context of an argument about a law from for decades ago. Still, if he gets his way, most of Paul’s arguments for the next six years are going to be unscripted. If his principles compel him to oppose things like the Civil Rights Act, we deserve to know about it. If, as Paul has argued, they have no bearing on such issues, then he shouldn’t be running on his principles in the first place. There’s a place where people can talk about their politics without having to apply them to their government, and I’m sure Sarah Palin would help him settle in.