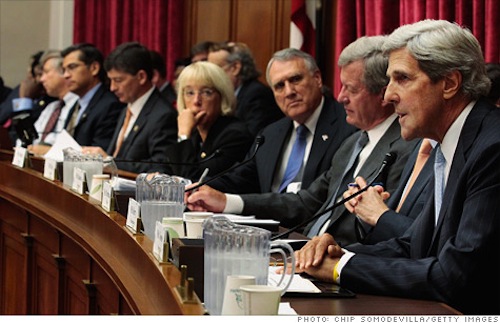 As of this morning, the Congressional Deficit Super Committee is neither super nor really a committee, since they managed to agree on exactly no things. Congress and the deficit remain real. Meanwhile, the group of six Republicans and six Democrats cannot even settle on why they failed to reach an agreement, although both sides concur in principle: it was them. “We made a reasonable offer and got nothing in return. We got naked in the room. Republicans are standing there in overcoats, hats and gloves and are toasty warm,” said one Democrat on the panel. “We showed some leg. The Democrats want us to get completely naked,” explained a Republican aide. As usual when two parties can’t bring themselves to take their clothes off at the same time, somebody else is going to get fucked.

That’s us. Now that this miniature version of Congress has failed to address the same problem in exactly the same way big Congress did, a series of automatic spending cuts will be triggered for the Pentagon, Social Security and other federal programs. Of course, Congress could aways vote to suspend its own rule and push the problem of reducing the deficit to another time, as they did with this committee. Fun coincidence: one of the sticking points in super committee negotiations has been Republicans’ refusal to repeal the Bush tax cuts, which themselves overcame the objections of deficit hawks only because they were supposed to be temporary.

It’s almost as if our congressional representatives consistently excused themselves from fiscal responsibility by saying that their indulgences are just for now. It’s almost as if, in an America that destroyed its own economy by loaning itself money it couldn’t pay back for houses it couldn’t afford, this were sort of a problem behavior. I would describe the news that the super committee failed to reach a deficit-reduction agreement as grimly unsurprising. Is it bad news? Yes, almost certainly. Did everyone see it coming from the moment John Kerry and John Kyl strode boldly into a conference room together? Yeah, pretty much.

Congress agrees that the federal deficit is an enormous problem. It has also demonstrated, in broad strokes last summer and now in microcosm, that it cannot do anything about it. I repeat: the current Congress is not capable of controlling federal revenue or expenditures. What are we, the American people, supposed to make of that? Is it the congresspeople we have now? Because we voted for them pretty recently, and deficits were a big deal then, too. Is it the institution of Congress itself? Because I personally grew up putting a lot of stock in the instruments of representative government, and I’m not really sure what I might like otherwise.

If democracy is not the problem and the people we elect through it are interchangeably inept, we are forced to consider a third culprit: the electorate. Maybe the people on the deficit reduction super committee think that not reducing the deficit is an okay thing to do because of what they think of us. Maybe they looked at a debt-ridden electorate literally and figuratively mortgaging its future and thought, the odds that these people will care about this and remember to punish us for it are a fraction of a fraction.

I hope they are not right. I hope that the members of the deficit reduction super committee are voted out of office with extreme prejudice, and that today marks the end of the careers of Kerry and Kyl and all the other so-called statesmen whose decades in office cannot impel them to take any action whatsoever to benefit the United States of America. While we’re at it, I hope the federal budget gets balanced. The problem with both of these ideas is that I can’t get anyone to do them for me.