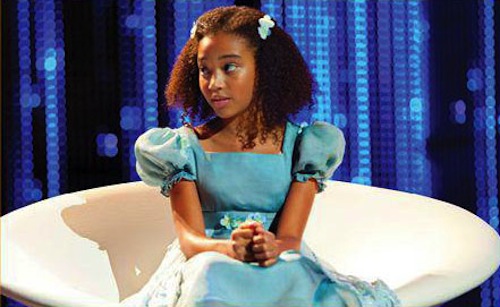 Amandla Stenberg as Rue in The Hunger Games

I have not seen The Hunger Games, because it has too many children in it. Granted, my understanding of the film is that those children are killing and possibly eating one another, which is nice, but narrative convention dictates that they will still be alive and talking for several minutes of screen time. That’s no good. But I can still enjoy the many, many internet articles produced in conjunction with the film, not the least of which is the news that racist Hunger Games fans were disappointed to find black actors playing several of the main characters. Never mind that those characters are described as having “dark skin” in the books; they’re characters in books, for Pete’s sake, and books are where you find white people the same way the library is where you find bums. Obviously, the fans foolish enough to tweet their disappointment at such faithful casting are stone-cold racists. The question of why their racism is a news story—and an incredibly popular one, at that—is less clear.

Don’t get me wrong—reading the tweets of racist fans of children’s literature is fun. Racists are invariably at the forefront of the newest developments in weasel language—q.v. their masterful exploitation of “politically correct”—so their remarks are fascinating to anyone who takes an interest in rhetoric. 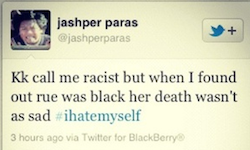 Consider the fellow at right, who understands the use if not the meaning of the trope call me [adj.,] but… That doesn’t work when the appellation you ironically undermine describes exactly what you’re saying. Call me drunk, but I love you guys are assho—bleeaarrgggghh! The spectacle of a man who A) likes the books enough to care about casting decisions for the movie, but not enough to notice explicit descriptions of the main characters, and B) understands that it is racist that he cares less when black people die but C) takes to Twitter to announce it anyway, even though it ostensibly makes him D) hate himself is amusing. This person is stupid.

He is also just some dude who recently deleted his Twitter account. None of the people in the Jezebel story are public figures. Their English usage is such that they appear to belong to the bottom quintile of even Twitter users, which puts them especially low in the rankings worldwide. These are the dregs of contemporary society. The miracle of the internet has given their voices equal amplitude to everyone else’s, but their opinions are not important. If we accept the conventional idea of news as coverage of events that affect people and people who affect events, the tweets of racist moviegoers are not news.

Yet this story has legs. The Jezebel piece alone has 427,000 likes on Facebook and has been read nearly two million times. Variations on the theme are all over my Facebook feed, which if you’re reading this means they are likely all over yours, too. There is clearly something about the racist Hunger Games fans story that appeals to a large segment of the internet-reading population. People read it and regard it as important enough to share, despite the fact that it affects no one and the majority of Twitter accounts it describes no longer exist. From a journalistic standpoint, it is a human interest story. But the humans it describes are A) pure constructs and B) crappy.

Conventional wisdom holds that the human interest story must be about people who are good.*

As usual, the internet has boned conventional wisdom right in the ear, and the advent of sharable web journalism has brought with it what I am going to call the Human Disdain Story. While the traditional human interest story makes you feel better by showing you the goodness or resilience of someone else, the Human Disdain Story does so by presenting someone who is obviously worse than you. It’s an exercise in manufactured indignation, as evidenced by reporter Dodai Stewart’s claim that “what people are saying is disappointing, sad, stomach-churning, and just plain racist.”

I’m not sure my stomach actually churned when I read those racist movie tweets. I’m pretty sure I felt the same 70/30 smug/sad mixture I get when I see a particularly bad driver. The news that you can find dumb racists on Twitter may provide a brief frisson of superiority, but it isn’t news. It tells us nothing about our world that we didn’t already know. The news that hundreds of thousands of people read about it and felt compelled to show the story to somebody else, though—that might tell us something we need to consider.