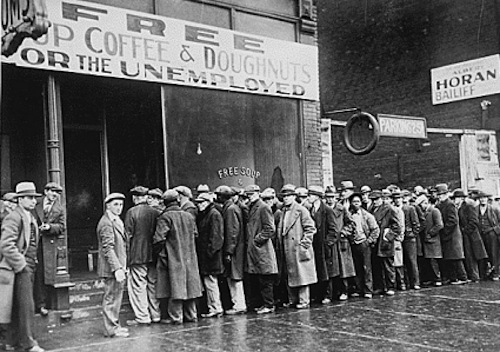 Slate is midway through what is threatened to be a two-week series on income inequality in America, just in time for the controversial announcement that the President will not try to solve the economy by giving more money to rich people. Timothy Noah looks at several putative dangers to America’s middle class, including immigration, racism/sexism, and computers, none of which accounts for the growing gap between rich and poor in the United States. That gap is enormous. Currently, the wealthiest 1% of Americans take home 24% of the national income. Between 1980 and 2005, more than 80% of the nation’s considerable increase in earnings went to that 1%. To put that in perspective, back in 1915—the era of the Carnegies, Vanderbilts and Rockefellers, as well as a generation of non name-brand robber barons—the top 1% only got 18%. Economically, ours is a less equal America than that of our great grandparents.

It’s also a more generally successful one, obviously. The median income in 1915 was $687 a year—about $15,000 in today’s dollars, if you use the Consumer Price Index to adjust. Then again, if you adjust using relative share of GDP, it’s the equivalent of $253,000 a year. While the vast majority of us are making a lot more money than our World War I-era counterparts, the share of the national pie given to the average worker in 1915 would put him in the highest tax bracket in the United States today.

So the country’s resources are now more concentrated among a smaller portion of the population than at any time since we started measuring such things—except for in 1929, which was not an ominous year at the time. Is that bad? My sense of fairness is wounded by the knowledge that the rich are richer now than ever before, but it’s salved by knowing that questionably employed freelance writers are now richer than ever, too. If the pie has three times more cherries in it—to strain a metaphor—what does it matter that it’s not being sliced evenly?

For one, it makes it more likely that America will gradually develop an aristocracy. By “gradually,” I mean “pretty much already.” The richest 2% of American households make more than $250,000 a year, which is the kind of money that you don’t spend. The wealthy save a higher percentage of their income than any other socioeconomic group, which means that the most likely way for that money to get back into the economy is not through investment, research or wages but childbirth.

Rich people have rich children, who in turn get good nutrition, go to good schools, associate with good (read: rich) people and eventually get good jobs. That’s hardly an immoral system, but as wealth becomes concentrated it begins to work against the social mobility on which the United States prides itself. As this boring study that I don’t expect you to read discovered, America is not necessarily the beacon of opportunity we think it is. The following graph shows the comparative strength of correlation between fathers’ incomes and that of their sons in several postindustrial economies: 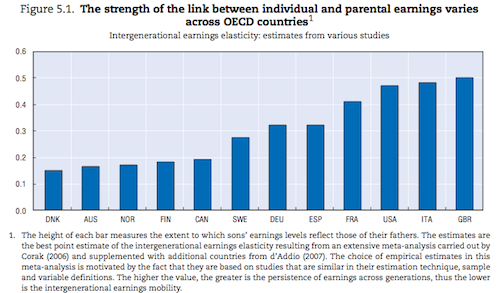 The good news is that America still offers more social mobility than Italy and Great Britain. Unfortunately, it’s easier to work your way up (or down) the economic ladder in Canada, Australia and Germany, as well as in such bleak socialist dystopias as Denmark, Norway and Sweden.

Our rich people are rich as shit, but there are very few of them. To extend our already strained outrage at the recent debate over the Bush tax cuts: one would think that the question of whether to give a tax break to the wealthiest 2% of Americans would be a clearcut issue of public opinion. In a perfect democracy laboring under our current concerns, I think the vote would be about 98% to 2%.

In practice, things are not so simple. One reason such a large number of Americans have adopted political positions perfectly counter to their own interest may be the inordinate discrepancy, in the United States, between numerical and economic power. With a quarter of the money in the hands of a hundredth of the people, our democracy is bound to work on some principles besides the common will. Whether that means we’re also outside the common good is another question. It should at least be asked, if for no other reason than we are less equal now than we have been in a hundred years.