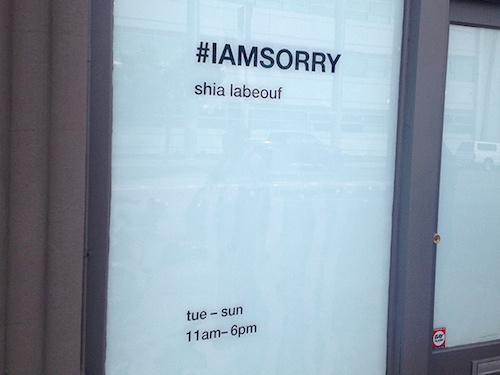 Even though he tweeted “I AM NOT FAMOUS ANYMORE” three times in a row last week, Shia LaBeouf cannot put Beetlejuice back in the model. We know who he is, and we are interested in what he does—not in the good way anymore, where we want to see him be friends with a transforming robot, but in the other way where we cannot believe what a schmuck he is. According to Vice, LaBeouf is spending this week doing “some kind of super artsy thing” in LA. First, props to The Angel Ben Gabriel for the link, and second, I believe the word for some kind of super artsy thing is “art.” In keeping with Monsieur LaBeouf’s recent work, the art on offer seems passive aggressive in the extreme.

The installation is titled #IAMSORRY, which appears to be a reference to LaBeouf’s blatant plagiarism of a Daniel Clowes graphic novel. As I’m sure you remember, we were all extraordinary dicks about that—pointing out that LaBeouf did it, observing that plagiarism is wrong, noticing that he plagiarized much of his apology and subsequent press statements, et cetera.

That last part marked the beginning of stage two, when LaBeouf mounted a semi-philosophical attack on the very ideas of authorship and originality while continuing to antagonize Clowes. Nobody really bought that, for the same reason that Marx did not argue that all property is theft immediately after stealing a car. Now we are in stage three, when our continued refusal to think it’s cool that LaBeouf ripped off another person’s published work has made him a martyr in his own conception.

Hence the concept of #IAMSORRY. According to Jamie Lee Curtis Taete, visitors to the installation enter one at a time and are invited to choose from a table of objects: bullwhip, pliers, Daniel Clowes comic, cologne, Optimus Prime toy, whiskey, chocolates, bowl of mean tweets re: SLB, ukelele. Because of everything that’s wrong with internet journalism, Taete chose the mean tweets.

He then entered another room where a man wearing SLB’s signature “I am not famous anymore” paper bag sat at a table. This man, presumably LaBeouf, did not speak. His paper bag was moist under the eyeholes. After a few minutes, Taete left.

Obviously, #IAMSORRY is open to interpretation. Still, the message seems clear. Most of the objects on offer to visitors—described as “implements” in the press release—could serve as instruments of torture. That seems obvious in the case of the bullwhip and pliers, but it’s also there in the Optimus Prime doll and the Clowes comic, both of which qualify as symbols of LaBeouf’s illegitimacy as an artist. Mean tweets are certainly mean. The chocolates and whiskey are perhaps less clearly torture tools, whereas the ukelele will make sense to anyone with a grandfather.

In all, these items and the structure of the installation suggest that LaBeouf’s is inviting people to come in and torture him, presumably to show how sorry he is. Here his apology takes on a less sincere tone, as it has done since he began conspicuously flagellating himself.

An apology needs to be proportional to the offense. In LaBeouf’s case, his apology has been both disproportionately small—he still hasn’t given Clowes any money for stealing his story—and disproportionately grand. LaBeouf’s histrionics have drawn attention to himself and implied that we are all overreacting to his plagiarism, which is exactly what a sincere apology does not do.

Inviting us to torture him in an art installation is maybe the apotheosis of this technique. It suggests that LaBeouf has learned nothing from what he did—that he in fact regards himself as a victim of hysteria over plagiarism. It implies that he does not take what he did seriously.

That is not really a big deal to us. I don’t really care what LaBeouf does except insofar as it is susceptible to analysis, because he did not turn my graphic novel into a short film without permission. If I were Clowes, though, and a child actor turned smug poseur audaciously ripped off my story and then acted like I was a dick for pointing it out, I would be getting sick of this stuff. If nothing else, I would be tempted to ask him to take my comic book out of his art installation. But that would probably only make LaBeouf feel better about himself.