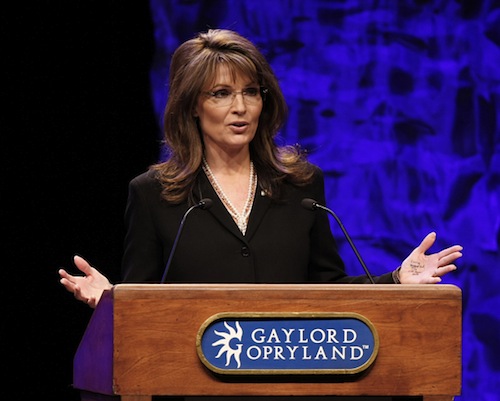 This picture chosen entirely for the logo on the podium. I am 32 years old.

This weekend, while the rest of us were chasing dogs around backyard volleyball courts and drinking beer, Sarah Palin was out there getting that money, like she do. On Friday, she appeared at the National Rifle Association’s annual meeting in Charlotte, North Carolina, where she read from her Blackberry a series of “You might be a redneck…” jokes that she found on the internet. First, let me say how glad I am that my father has added Sarah Palin to his email forward list. Second, the NRA seems to have paid hundreds of thousands of dollars to someone who is about to get a C in her high school speech class. In refuting the claim that the Tea Party is composed of people who are “violent or racist or rednecks,” Palin said that “I don’t really have a problem with the redneck part of it, to tell you the truth. I don’t. That’s fine with me.” She then glanced furtively at her watch before adding adding, “Yup. Fine and dandy. [Beat.] You betcha. Because we love America. [Pause, consternation.] America! [Applause.]”

Rarely has Palin’s status as a lifestyle product been more evident than it was telling redneck jokes to the NRA on Friday night. As the 2008 election becomes an increasingly dreamlike memory, her public remarks have increasingly abandoned explicit political content in favor of assertions of identity. Part of that likely follows from her involvement in the Tea Party, which has consistently taken a stronger interest in establishing itself as an Important Political Movement than in articulating specific policies. Yet Palin’s lifestyle politics exceeds even that. The Sarah Palin of 2010 resembles a conservative Oprah more than she does the Sarah Palin of 2008. She seems to have learned two lessons from that year: 1) politics is hard and 2) white people with pickup trucks think she’s pretty.

That’s an insulting assessment of Palin’s constituency, but it’s little more insulting than her own. You might be redneck “if you ever spent the night in the back of your truck rather than paying for a hotel room,” Palin told the audience in Charlotte, before adding, “We still do.” No, you lying churchwoman, you don’t. As we know from last month’s leak, Palin’s speaker contract requires “a pre-registered one-bedroom suite and two single rooms in a deluxe hotel,” along with first-class plane tickets or a donated private plane, provided it is “a Lear 60 or larger.” Since resigning the governorship of Alaska last year, Palin has made an estimated $12 million. When she says that one Christmas, Todd gave her an ice auger and she gave him a gallon of gas for his snow machine

, she’s not lying,* but she sure isn’t talking about this Christmas. This Christmas, Sarah Palin was rich.

She got that way by telling poor people how like them she is. Exactly why that worked is a matter of conjecture. Matt Taibbi, who may be the angriest man ever to smirk, sees in Palin’s success the denominating lowest in all of us. “Palin has figured out that…all you have to do to win elections in this country [is] flatter middle Americans’ moronic fantasies about themselves,” Taibbi writes. “It’s basically a risk-free strategy. You get up on stage and you say, ‘I’m just like all you idiots. And you idiots rock!'” By telling the country that “real Americans” are the ones who hang out in the town where they grew up and watch a lot of TV—as opposed to, say, getting degrees in constitutional law and becoming community organizers—Palin guarantees the support of the mediocre, which is historically a large bloc.

Taibbi’s assessment is appealing, if only for the sharpness of its disdain, but it still doesn’t explain why the You Idiots Rock strategy wins elections—or, for that matter, if it does. It’s easy to forget this, but before Sarah Palin became a national phenomenon, she became the nail in the coffin of John McCain’s presidential campaign. She’s demonstrated that a false populism can make you rich, but can it get you elected?

Palin’s popularity seems to have increased directly with her abandonment of actual political speech. Sure, she appears at NRA meetings and Tea Party conventions and rallies, but her message is almost entirely cultural at this point. She’s like William Jennings Bryan: the Great Commoner, rallying an imagined America while remaining utterly unelectable in the present one. Somehow, Sarah Palin has stopped talking about politics to become the most exciting figure in politics today. What that says about the country and how we run it remains to be seen. But you might be a redneck if your favorite politician never runs for office again.