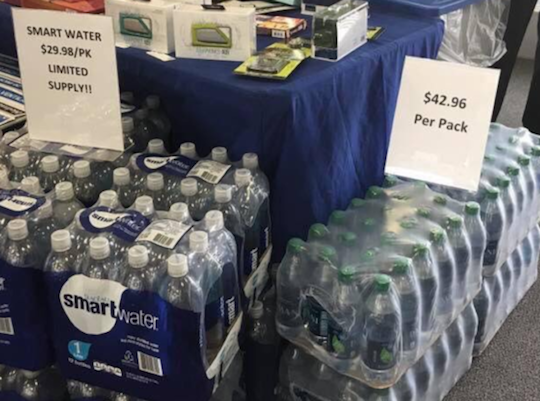 That this system is the best way to distribute limited resources in the face of unlimited wants is the cornerstone idea of neoliberal economics. As demand exceeds supply, prices increase, until they reach a point of equilibrium where the number of consumers who want to buy a product at price (X) equals the number of producers who want to supply it. The market seeks its own best state. Our confidence in this theory is such that we regard a market economy as not just convenient or effective but ethical. It works so well, neoliberal theory holds, that it is the only moral economic system.

Except in a crisis like we’ve seen in Houston—then we have no problem casting market economics aside. When a shortage of potable water1 acts to dramatically increase prices, we call it gouging. In such situations, we say the market has failed and call on government to intervene. But what about the market has changed? Its supply-and-demand pricing mechanism is functioning the same way it always does. It’s just that demand has spiked, carrying prices with it. The problem in this situation is not that the market is behaving unusually, but that the consequences of its normal behavior have become unusually bad.

In unusual circumstances, the free market becomes unethical. For example, it is unethical to sell water at very high prices when the water supply is threatened. This observation seems superficial, even fatuous, but it raises questions that are difficult to answer. For example, why is market pricing unethical when it leads to price gouging during a natural disaster, but ethical when it leads to steady year-to-year price increases on a necessary product like health care?

The health care sector is a good example in the sense that it has seen exorbitant prices for a necessary product, and you can argue that any need for major treatment—such as popping your stupid shoulder back in—constitutes a mini-crisis for the consumer that is the individual equivalent of a citywide water shortage. But it’s a bad analog in the sense that the idiosyncrasies of the health care market, including third-party purchasing by insurers and oligopoly ownership of hospitals, make it something other than free. A better example might be food.

Food is a product that literally everyone needs. It used to be something people produced themselves, without relying on a market, but subsistence farming in the contemporary United States is no longer possible. Small numbers of people can still do it, but the idea that 330 million Americans could grow their own food is laughable under present conditions. People depend on the market for food. While there is not a food shortage in this country, the situation is equivalent to one in which tap water has stopped flowing, and we all have to buy what we need at the store.

You can see where I am going with this argument. If price gouging is unethical under conditions where people cannot get their own water, why is profit-taking ethical under conditions where people cannot get their own food? Again, the question seems not to turn on the behavior itself but on its consequences. We haven’t seen serious price-gouging on food, so we accept the long-term profiteering of the industry. The market is efficient and good insofar as it does not make the price of necessary things to dear too suddenly.

Those last two words are important. I submit that the market economy has made the price of many necessary things too dear—health care, for example, but also education and housing. As a function of average wages, the median home in 2011 cost three times what it did in 1970.2 That’s a bigger gouge than what we saw for water at Best Buy in Houston. It just took longer to happen.

Perhaps these evils are necessary, and something other than a market economy would be worse. I think we should resist the idea that market pricing is inherently moral or even efficient, though. Our determinations of these qualities ultimately rests not on the mechanism but on the results it produces. We have no problem calling the results a failure when they happen during a sudden flood. When they happen steadily, however, across nearly all sectors of the economy over a period of decades, we call them the necessary workings of a just and efficient market. I’m not sure that’s true.