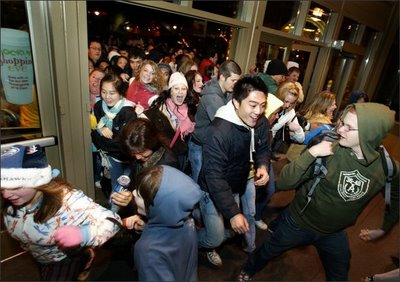 Here’s what a terrible catastrophe our nation has suffered: according to the New York Times, retail sales are so bad, it’s like we’re living in 2005. That’s an improvement, but not nearly what people were hoping for from a September bolstered by back-to-school and Labor Day, which is apparently a big shopping event. In general, sales are up at discount stores like Target and T.J. Maxx (the extra X is for Sexxy*)

and down at aspirational stores your aunt wants to go to like Neiman Marcus and Saks. The overall trend appears to be that people are trying to spend less money on clothes and stuff, or, as Ross Stores chief executive Michael Balmuth puts is, “We believe our performance for both the month and year-to-date periods reflects that our core strategy of delivering fresh and exciting name brand bargains continues to resonate with today’s value-focused consumers.”

It’s terrifying to consider that Michael Balmuth might actually use words like that to think, but it’s also a little scary to consider that tone of the Times article. The implicit message of the story is that 2005-level retail sales are Bad News, which they were presumably not in 2005.*

Obviously, when you want the economy to get better, you want retails sales to be like they were when the economy was really good. It’s possible, though, that the bonanza spending of 2006-2008 was the anomaly, and the relatively sluggish buying patterns of 2005 reflect something more akin to normal, responsible behavior. If you accept that completely unsupported assertion, what’s striking about the Times article is how quickly we recalibrated our expectations.

Let us not forget that the recent economic rat-screw was a consequence, in large part, of overconsumption. In the endless game of Clue that is the search for an explanation for what happened in 2008, Mr. Lehman in the Housing Market with the Subprime Loan is the most likely culprit. It’s a problem of greed; Americans wanted houses they couldn’t afford, banks wanted loan markets that didn’t really exist, and investors wanted returns that couldn’t be safely generated. To reduce all this to “consumption” is somewhat tenuous, but I think it’s reasonable to say that loose money and  a sense of entitlement conspired to encourage a lot of irresponsible decisions in 2006 and 2007. Average Americans bought too much crap. Now we’ve spent a bajillion dollars trying to jump start the machine, with the unspoken terror that we might have to go back to saving up when we want a new iPod.

Regular readers are probably aware that we at Combat! consider consumerism a moral issue. In that sense, the Great Recession of 2008 is a reckoning, a moral judgment on a materialistic society. Part of the dry rot in American culture is that we ascribe too much meaning to consumer goods, whether they’re motorcycles or Miracle Whip. Is it possible that the same habits of mind that lead us to believe that our blue jeans capture fundamental aspects of our individual characters have some effect on our ability to understand problems threatening our national character, as well? Is our refusal to embrace public health care a reflection of our fear of embracing a public identity? And, by extension, do we consider a decline in retail shopping analogous to a diminishing of our selves?

It’s a stretch, which is what we do here. Still, I can think of worse than the news that Americans are buying less, particularly at Neiman Marcus. Some of the best American literature, art and music emerged during the Great Depression, and it’s possible that our great nation may benefit from being forced to express itself through something other than Abercrombie & Fitch. Nobody should have to lose his job, his house or his health insurance because of this real economic crisis. Maybe, though, it wouldn’t hurt him to wear last year’s jeans.