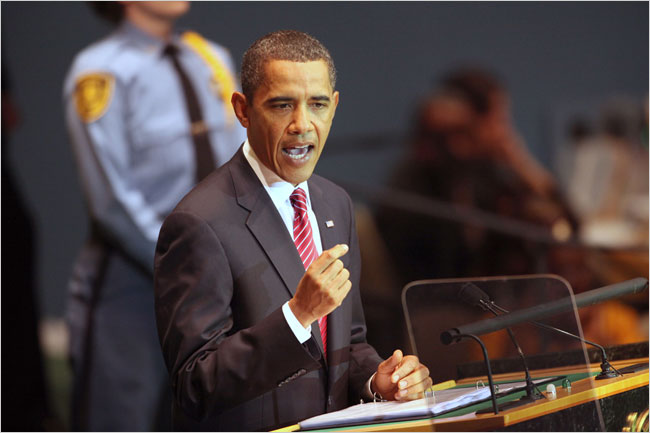 Let’s see, what’s in the news to…OH MY FUCKING GOD! WHAT THE FUCK? HOLY SHIT, THOSE ASSHOLES AT FOX ARE GOING TO SHIT PIGLETS! ASS! Excuse me. I was just a little surprised by the news that Barack Obama was awarded the Nobel Peace Prize this morning, despite the fact that he is currently presiding over two wars and still has a vacation place in Guantanamo Bay. Granted, he inherited those things, and he’s certainly a profound improvement on the guy who put them together. But this is the last thing the President needs right now, and frankly not the first thing he deserves. Those of you who read Combat! regularly (and did not just get here by typing “joose sociopath” into Google, which a surprising number of people do) know that I’m a big fan of Obama’s agenda, but for the last nine months it has remained an agenda, often to a frustrating degree. That’s due in part to the particularly toxic political climate in which he’s been forced to operate, and the jacked-up federal government that he has to try to repair. Still, awarding him a Nobel Prize because he has “captured the world’s attention and given its people hope for a better future,” as the Prize Committee put it, is only going to feed allegations that he is more symbol than substance. Perhaps, as Lech Walesa speculated, the prize is “an encouragement to act.” Let’s hope it works or—better yet—Obama gets all the advantages of the Prize and none of its liabilities by refusing it. You can do that, you know.

Meanwhile, the ever-classy Michael Steele has responded by saying, “The real question Americans are asking is, What has President Obama actually accomplished?” The RNC Chairman, who has the uncanny ability to know what all Americans are thinking moments after breaking news is announced, opined that Obama won’t be “receiving any awards from Americans for job creation, fiscal responsibility, or backing up rhetoric with concrete action.” He then returned to organizing his party’s efforts to block health care reform, vote down carbon emissions regulations, keep the Olympics from coming to Chicago, protest nuclear talks with Iran, and build an enormous magnet that will prevent the passage of time. You can read his utterly unproductive babblings and get a sense of his stupid, whorish life in this article about Obama’s award from Fox News, which leads with the Fair and Balanced sentence, “Despite less than one year in office and leading two wars, President Obama snatched the 2009 Nobel Peace Prize on Friday, stunning the world one week after failing to win an Olympic bid for his adopted hometown.” Snatched, huh? Also “adopted hometown” is a dirty thing to say about a place where the guy has lived for eighteen years.

They love that Olympics thing, too, don’t they? You’ve probably already seen the video of people at the Weekly Standard cheering the news that Chicago didn’t get it. Paul Krug-Man thinks that such behavior is indicative of a GOP that has devoted itself to the politics of spite.It’s natural that the two major American political parties would oppose each other on most issues, of course, but Krguman argues that Democratic politicking at least enjoys ideological coherence, while Republican rhetoric does not. He points out that when Bush wanted to privatize Social Security, the Democratic objection was that it would create too much risk—a notion consistent with the Dems vision for social welfare in general. Compare this to the Republican argument against Democratic health care reform, which—besides the assertion that the government will kill your grandma—centers largely on the idea that it will undermine Medicare, a program against which the GOP has campaigned bitterly since its inception. Krugman’s got a point, and it’s further evidence that the GOP has become more interested in politics than in governance. They have, in the last week, been glad that we didn’t get the Olympics and angry that our President won the Nobel Prize.

Of course, the Republican Party has only abandoned government in order to hand it over to the American people, whose common sense and responsible stewardship will never fail us. Unless, of course, we are their children and we need inoculation against disease. According to a recent poll, 38% of parents are unwilling to give their kids permission to be vaccinated for swine flu at their schools, despite the fact that children are the main transmitters of infectious disease. “Basically, the swine flu is the flu. I’m not overly excited about it,” said Julie Uehlein, a Tullahoma, Tennessee mother who is not, you know, a fucking doctor. “My concerns about the vaccine are what are the long-term effects?” “Now if you’ll excuse me,” I assume she said next, “I have to get back to reading the New England Journal of Medicine.” Much like when you try to operate a postindustrial representative democracy, disease control is one of those areas in which the stupid can hurt the smart. A third of the country’s schoolchildren going unvaccinated—for no other reason than that their parents are contrarians—is enough to turn our public schools into a petri dish. I’m not saying should stop making out with drunk schoolteachers, but maybe stop by Osco and get a shot first.

There comes a point when the sheer weight of people not doing stuff drives a man to distraction, as we at Combat! are well aware. You know who else is aware of that? The finally dead Hunter S. Thompson, whose letter to a sluggish film producer you can read at Lettersofnote.com. Entitled “Okay, You Lazy Bitch,” it expresses Thompson’s growing impatience at the “waterhead fuckaround” that is The Shooting Gallery’s attempt to make a film version of his Rum Diary. Props to alert reader/sleek vagabonde Katie Finklea for the link. Lettersofnote.com turns out to be completely rad, and includes missives from Albert Einstein and this kid who designed a rocket ship for Australia. I think we can all agree that Einstein and Hunter Thompson flying around in a rocket ship designed by a child could straighten this country out real quick. I guess we’ll have to settle for our Nobel prize-winning President instead.