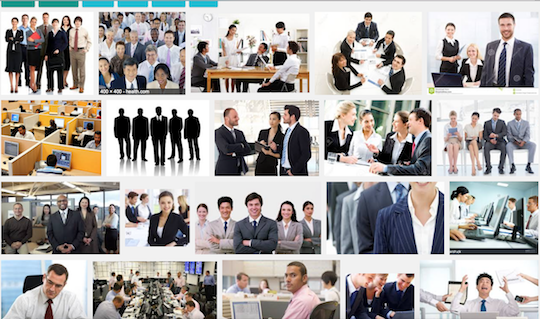 How many black men can you find in this image search for “white collar employees?”

Today, the Labor Department will release new regulations that raise the salary threshold for overtime pay to $47,476 a year. Since 2004, salaried employees have been ineligible for overtime if they made more than $23,660. This threshold established the terms of work recognizable to people around my age: 40 hours a week when you interview, 50 to 60 hours a week for the same pay once you’ve got the job. Raising the threshold will increase the number of salaried employees who get paid extra for working more, forcing employers to either hire more people or better compensate those they already have. It also reduces the number of people who are considered “management” in the Labor Department rubric. Perhaps that’s what prompted David French of the National Retail Federation to say this:

“This is an extreme revision in the white-collar threshold. By executive fiat, the Department of Labor is effectively demoting millions of workers.”

It’s the kind of demotion where they get paid more. If French ever loses his job at NRF, he’s a shoe-in for a position at the National Board of Sophistry.

If you’re the kind of person who pays people rather than getting paid, today’s changes from the Labor Department are bad news. It used to be that whatever extra work you could get out of a salaried employee was free—and show me a salaried employee who makes less than $23,660 a year. This new threshold will make the 40-hour workweek something more than a pleasant fiction for, as French has it, “millions of workers.” They will either get paid more or work less and get paid the same amount.

There’s no question this rule change will affect a lot of people. As Vice President Biden noted, more than 60% of salaried workers qualified for overtime in 1975. With the $23,660 threshold, only 7% qualify today. This change sure looks like an unequivocal boon for workers, but it’s French’s job to equivocate. He represents an organization that pays people, so he must argue that paying them less is in everybody’s best interest. That’s a tough sell, but here he is with that thing about demoting millions by executive fiat.

The executive fiat part is standard anti-Obama stuff. He’s an autocrat. He seems to think that being elected president gives him the right to make executive decisions. But the demotion part is genius. Because the Labor Department threshold distinguishes between salaried labor and “management”—whether those above the threshold make managerial decisions or not—French can argue that the new threshold means millions of employees aren’t managers anymore.

Hence the phrase “effectively demoting.” French’s use of “effective” here is extremely loose, bordering on the opposite of that word’s denotative meaning. One effect of this demotion is that those demoted will get paid more. Their titles won’t change, and neither will their positions in their workplaces. By “effectively demoting,” French seems to mean “technically demoting, in the eyes of the Labor Department.” Everyone will do the same job for either fewer hours or more money. The only thing they lose is the dubious prestige of calling themselves management.

But isn’t that just the world of work today? I submit that a signal experience of salaried work for my generation is getting paid in prestige instead of money. From the unpaid internship to the nights-and-weekends salary job to the writing gig that offers no pay but great exposure,1 employers have found ways to make us feel like we’re just lucky to be working.

In some ways, we are. The job market is none too friendly to people who work for a living. But it’s gotten that way through the steady erosion of protections like the overtime threshold. French’s comments remind us that capital versus labor is still a real and relevant fight, even for those of us who don’t work in factories. Work sucks. We shouldn’t have to do it as much as we do. Pay us more, and we won’t. That some people consider that proposition a catastrophe raises important questions about what we mean by “us.”