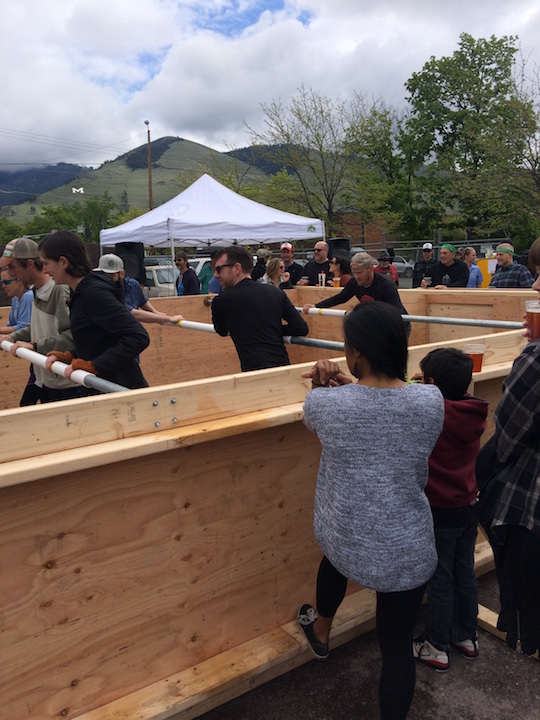 Human foosball is much like regular foosball. Rows of players try to kick a ball into a goal. They can only move side-to-side. It is played at a bar while drinking, so as it progresses it becomes both more competitive and more terrifyingly arbitrary. The best way to score is not the carefully considered shot but the element of surprise. The main difference—other than that human foosball is played on human scale—is that tabletop foosball players cannot reach one another, to prevent breakage. Human foosball does not incorporate that design.

The pipes on the Kettlehouse court were about four feet apart. The players could easily reach one another, such that anytime the ball was on the ground, human foosball gave way to human leg fighting. My right leg feels like it went to a tae kwon do tournament. That’s me in the center of the picture above, wearing black because it’s such a nice spring day. You can’t see it, but the woman directly behind me is wearing lace-up boots with big, thick heels. It seemed like an odd choice at first, but after the third stomp it became obvious she had played human foosball before.

As you can see from the picture, the closest human foosball opponents are behind you. Because the rules require you to keep both hands on the pipe,1 the best way to strip the ball is to kick backwards blindly, dragging for your opponents’ legs or possibly even the ball without looking at them. This arrangement discourages empathy.

I spent most of our third game wrestling vigorously but amicably with the woman behind me for control of my own leg. The second game, in which my opposite number was a college student with lots of mass but poor control of his hips, was less friendly. Later in the afternoon, a fight broke out between Garden City Plumbing and Heating and the Bonner Cats, when a Cats player—evidently panicked at being in the big city—punched a GCPH player twenty years his senior. His target had him in a murder choke before they were separated, and both teams were disqualified.

So human foosball got a little chippy. It was also incredibly fun, and our team—Human Booze Fall—performed better than expected. It turned out to be a beautiful afternoon, once we got past the initial cold drizzle and the midpoint rain. There was a healthy crowd but no so many as to become oppressive, and dogs and children were comfortable. It seemed like one of those only-in-Missoula events.

I usually find that expression as empty here as I did in New York. “Only in [place I live now]” is the call of the rube. But I submit that Missoula is uniquely suited to human foosball. Our economy has enabled something like Craft Beer Week by shedding factories, the timber industry, and possibly now the university to devote our resources to breweries. Our population is large enough to field 12 teams and a couple hundred spectators, but not so large as to swamp the Kettlehouse with jerks. And our vestigial local culture is cool enough to produce a human foosball court but not too cool to enjoy it.

The report from human foosball is that everything in Missoula is great, once you get winter out of the way. Thank you, Russ, for putting it together. And thank you, soccer girl with sharp boots, for bruising my deltoid ligament. You ain’t the first, but you’re in the top five, definitely.