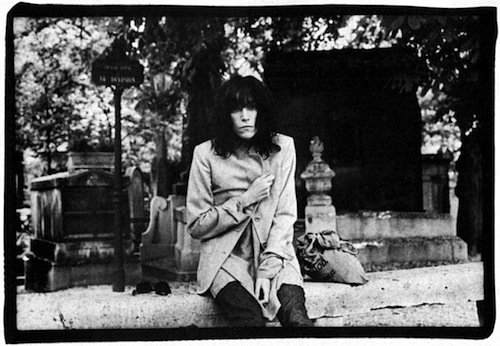 Patti Smith at the grave of Jim Morrison in Pere-Lachaise Cemetery, 1976

Students in introductory painting classes are typically instructed not to use black, as it flattens the composition. Browns, blues and heavily darkened versions of any other color create depth through shading, but the eye sees black as nothing, and nothing is a plane. Absence, by definition, is the absence of dimension. It’s satisfying to know that art schools will continue to produce versatile metaphors long after they’ve stopped producing artists, but this particular truism of painting has lived through the invention of its own counterexample in the black and white photograph. 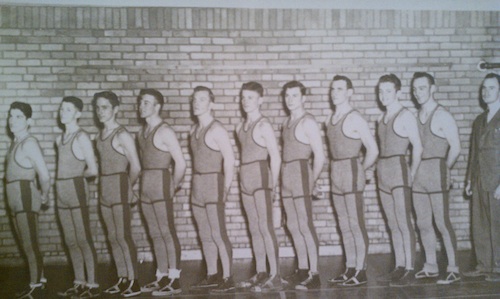 The eye sees black in photos regularly, and it has no problem maintaining its perception of depth within that context. Why is open to speculation. The technical answer is that photographic black is invariably adulterated: black interspersed with very dark gray, black interrupted by microdots of light. But I question the impossibility of true black, which seems to appear in photos all the time—case in point the silhouette of a mausoleum behind Patti Smith there in Pere-Lachaise. That looks awful black, but we have no problem recognizing its depth in the field.

I suspect that it is because we know photographs are real. The assumption is not always correct, particularly post-Photoshop, but we view a photo with the implicit confidence that what we are seeing once occupied three-dimensional space. Any apparent flatness can safely be dismissed as a misinterpretation of the eye. Not so with paintings, where what we see is a two-dimensional reification of the dimensionless space of the painter’s imagination. Where a photograph is a reduction of something real, a painting is an amplification of something thought. It is therefore vulnerable to abstractions that do not exist in life. It is vulnerable to black.

This distinction regarding paintings and photographs can also be seen when we regard death. In The Myth of Sisyphus, Camus observes that death is problematic for the careful thinker, since it is the one aspect of human life of which we can have no personal experience. In painterly terms—in the project of making things that exist in our head satisfyingly more real—death is black. If lived experience is the palette with which we compose, death, as the absence of lived experience, is flattening. It is the space in the field where dimensionlessness begins.

Yet, to extend the metaphor, we see it in photographs all the time. Despite our frustrating inability to accurately render death in our imaginations, any realistic picture of life admits it. Dear reader, we are both going to die. Even children know this, and our documentary representations of life—our laws, our education/career/retirement plans, our exercises—account for the dimension along which everybody gets old and dies, or does not get old and dies anyway. Yet death is present in our expressive representations of life—on the canvas of our intellection—only as a frustrating abstraction. We do not paint with it because it flattens the field. Like the refusal of black from painting, our refusal of death from life is not so much a failure of realism as a technical consideration.

I have thought about death a lot in the past two weeks, and I have concluded that I am against it. Yet I have a hard time proposing an alternative system. Every death-free solution I come up with works within a given frame, but it disintegrates into formlessness beyond the edges. The astute reader will here recognize a third difference regarding photographs and paintings: a photo is a picture of something that happened in the past, whereas a painting is a picture of something that, at best, could happen in the future. Any look at the past includes the flat outlines of death, especially the further back you go. Only in our imaginations of the future is it artfully absent.

That is ironic, considering that the one thing you can say conclusively about death is that it is located in the future. Yet we feel it, viscerally, only in the past. This sensation is called grief: the flat recollection of something that we always knew was coming and managed to surprise us anyway. It is the simultaneous realization that A) we should not have ignored something and B) we need to ignore it again to move forward. In reading over today’s post, I notice that I have used the word “yet” an inordinate number of times. Here is perhaps the great technical problem regarding death. We cannot conceive it. It flattens everything around it. And yet, and yet, and yet…