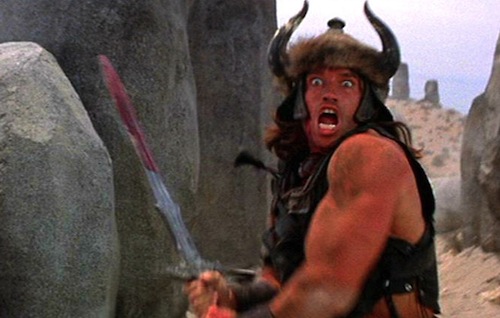 This image of Conan the Barbarian provided as a public-service alternative to pictures of inspectors, hearings or tax forms.

Congressional hearings into news that the IRS singled out conservative political groups applying for tax-exempt status is either a tempest in a teapot or a tempest issuing from the mouth of a tyrannical socialist dragon, depending on which news outlet you read. Mitch McConnell says that the heightened scrutiny of Tea Party organizations reflects a “culture of intimidation” in the Obama administration, which is kind of a weird assertion in light of claims that the President also covered it up. As often happens in our brave modern news cycle, the question of what the IRS did has been elbowed aside by questions of who knew what about what the IRS did, whether what the president might have known they did constitutes an impeachable offense, and how “so many Americans knew this was happening,” as Sarah Palin claims. Now you can know what’s happening, too, simply by reading this 55-page report.

It’s kind of dry. You can enliven your sense of the broader scandal and media response thereto, however, with just three pieces of salient information:

Item (1) suggests part of the problem in distinguishing between a scandal of political suppression and a scandal of mere incompetence. More than half of applications that the Inspector General reviewed were simply not resolved. It’s possible that the IRS sat on them to prevent conservative groups from winning their deserved tax-exempt status, as McConnell claims. It’s also possible that the IRS explanation holds water: faced with a deluge of applications, the Cincinnati unit implemented search terms like “Tea Party” “9/12” and “patriots” to identify those groups whose primary purpose is most likely politics rather than social welfare.

It shouldn’t have done that, because searches along those terms are politically biased against conservatives. At the same time, the NorCal Tea Party Patriots are not a charity. They are a political organization, and their baldfaced claim that their primary purpose is to promote social welfare reflects the fatal vagueness of section 501(c)(4) of the federal tax code, as well as our disastrously flawed interpretation of it.

Various “patriots” and “9/12” groups can say that they promote social welfare, but everybody knows that their purpose is to shill for conservative politics and Republican/libertarian candidates. The problem with the tax code is that it does not reflect what everybody knows. Since Citizens United v. FEC, literally thousands of political organizations have applied for 501(c)(4) status. The IRS has faced the difficult choice between scrutinizing them slowly, according to the letter of the law, and using common sense to scrutinize them quickly in possible violation of its mandate.

At least in one section of its Cincinnati office, the IRS chose poorly. Its poor choice reflects our own poor governance of campaign finance and taxation, however. “Make sure only charities get tax exemptions,” we say, having just declared that many obviously political organizations are charities. “Make sure your reviews are politically unbiased,” we tell them, when the overwhelming majority of phony charities support one political party.

The result, according to the Inspector General:

The Determinations Unit developed and began using criteria to identify political cases for review that inappropriately identified specific groups applying for tax-exempt status based on their names or policy positions instead of developing criteria based on tax-exempt laws and Treasury Regulations. (PDF 12)

They took a short cut, in other words, and still they were swamped. The sad thing about this scandal is that even after the Cincinnati Determinations Unit applied this unfair system for filtering tax exemption requests, they still didn’t deny anybody. Again, maybe the more-than-half of applications that weren’t resolved were sat upon for political reasons. Maybe, though, this scandal is symptomatic of a vague tax code brought to heel by a nonsensical campaign finance system. Tell people not to think about politics when they’re trying to figure out which political organizations are charities, and this is what you get.