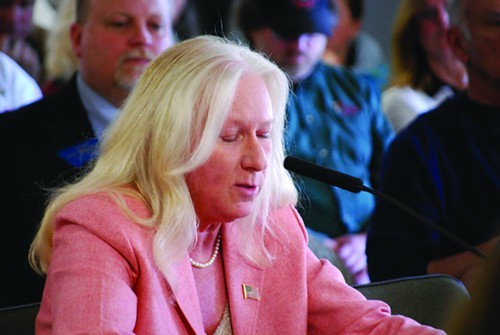 Yesterday, the Ravalli County Commission met for a weekly update from embattled treasurer Valerie Stamey, whose office has not produced a financial report since September. Since the last time commissioners formally met with Stamey, news broke that she had fled a default judgement in South Carolina after double-cashing an $18,000 check. She also appears to have defaulted on a mortgage she filed on her home there in 2007, after she had moved to Montana. Stamey addressed neither of these issues with the commission, nor did she mention the county financial reports. She did, however, accuse commissioners Greg Chilcott and JR Iman of conspiring to illegally sell tax liens and orchestrating a “vile campaign to destroy my character.”

First of all, Stamey is thinking of a vile campaign to destroy her reputation. Your character is the same no matter what people say; it’s that pattern of belief and conduct that determines—just to name an example—whether you intentionally

defrauded a law firm of $18,000.* People talking about you does not destroy your character.

Of course, if you accidentally cashed the same $20,000 check twice and accidentally defaulted on your mortgage—in much the same way that you accidentally didn’t produce Ravalli County finance reports for four months—that’s your reputation. When people find out that you are professionally and maybe illegally bad at keeping track of money, that’s definitely going to be destroyed.

But it doesn’t matter if Stamey is incompetent, because she has uncovered a criminal conspiracy among the people demanding that she do her job. For the sake of myself and everyone reading this blog, I hope that Iman and Chilcott really have been illegally selling tax liens. That would be the shit sandwich we get for free because Stamey’s clusterfudge sundae fell over on it.

But it seems unlikely, since A) the last four annual audits of Ravalli County haven’t revealed any discrepancies and B) uncovering such a conspiracy would require Stamey to do the books, which was the whole problem in the first place. Details of who did what and how she found out are sketchy, because Stamey left the meeting immediately after implicating Iman and Chilcott.

She did, however, provide a list of demands, which included removing all signatories but her from treasury accounts, posting a guard at her office, and ceasing all electronic communication between hers and other county departments. If Ravalli County wants to talk to its treasury, it must send a paper letter addressed to Stamey. She will then hold it against her forehead, guess which county commissioner apologizes to her therein, and throw it in the trash.

Or she will be removed from office really soon. It’s hard to believe that Stamey would slander Iman and Chilcott just to get out of delivering a progress report, because the endgame of that strategy is catastrophically limited. Still, everything we have seen from her thus far suggests that Stamey has not been doing her job. Her promise to deliver October reports “Friday or the Friday after that” sounded suspicious when she made it last week, and now it has been 50% broken. Given her stated intention to get the FBI to investigated half the county commission, it seems unlikely that she will give them reports the day after tomorrow.

So one explanation for Stamey’s behavior is that she has no endgame, and she is merely holding on to the Ravalli County Treasurer’s salary as long as she can. Such behavior would comport with the character of a person who took out a mortgage on a house she didn’t live in anymore and double-cashed a refi check. We can read this saga as the story of a woman who cannot resist quick money and short-term gain.

On the other hand, Stamey’s conspiracy happens to involve the two commissioners who resisted her appointment in the first place, and it indirectly vindicates the three who put her in office for what appear to be political reasons. Back when the Ravalli County commission was choosing a treasurer, Stamey narrowly beat out longtime county tax lead Linda Isaacs. Commissioners Jeff Burrows, Suzy Foss and Ron Stoltz cited Stamey’s management experience and positive attitude, but the real reason she was appointed seems to be that she was a Republican precinct captain.

That decision—opposed by Iman and Chilcott—has backfired spectacularly. It could easily cost the three conservative commissioners their jobs, unless it changes from a scandal to controversy.

In this cynical reading of events, Stamey is accusing Iman and Chilcott as a favor to her patrons. She’s going to lose her position either way, but if she casts enough doubt on the two commissioners who didn’t want her hired, the story might shift away from the three who did.

That would be a savvy move, and if I’m choosing between cunning and desperation to explain Stamey, I’m going to go with desperation. Still, something is rotten in Ravalli County, and I don’t think we’ve smelled the last of it. Missoula’s neighbor to the south may not be a good place to live, but lately it is a fantastic place to read about.