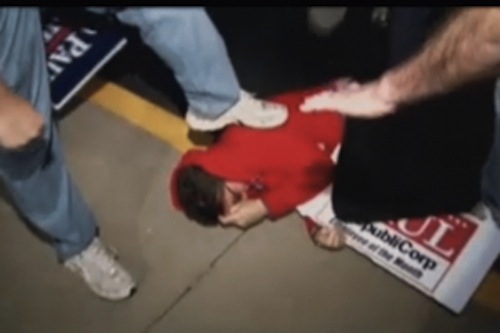 A volunteer for MoveOn.org who appeared outside Rand Paul’s Monday-night debate was wrestled to the curb by Paul supporters, one of whom kind of stomped on her head. Lauren Valle, a MoveOn supporter from Pennsylvania, arrived at the debate in a blonde wig carrying an employee of the month award from RepubliCorp, a trademark MoveOn established to emphasize the connection between the Republican Party and large business interests. She was pushed over and carried to the curb by several men—including Tim Profitt, who, after a moment’s hesitation, put his foot between her head and neck and did something between stepping and stomping. Video after the jump.

Those of us who have not lost all sense of proportion and/or human decency in our rabid concern over the possibility that a congressman’s son will or will not get elected to the Senate would like to point out that the following people are not cool:

1) Tim Profitt, Rand Paul volunteer/stomper of restrained women. Since Monday night, the Bourbon County Paul campaign coordinator has A) lost that position, B) received a court summons and C) issued an extremely half-assed apology. “I’m sorry that it came to that, and I apologize if it appeared overly forceful, but I was concerned about Rand’s safety,” Profitt told the Associated Press.

We all appreciate Profitt’s sincere regret that the situation forced him to step on the face of a woman pinned by three men in a prone position with her head elevated, but if that’s what it takes to protect Rand Paul, then so be it. Subsequent video shows that Valle didn’t get particularly close to Paul, and that in fact he may have already been inside the building when Profitt’s concern for his safety led him to maybe sort of curb check a girl, but the important thing is he’s not sorry.

2) MoveOn.org. Seriously, fuck you guys so much. I know it seemed like putting a 23 year-old women’s studies major in a wig and sending her from Pennsylvania to Kentucky to interrupt a congressional candidate on his way into a debate so she can present him with the snarky award from your front organization would advance American democracy, but it didn’t. Instead, your volunteer has a concussion, any actual political debate that occurred that night has been obliterated in a wave of spin and counter-spin, and both ends of the political spectrum are so far from any meaningful dialogue—much less cooperation—that they are currently arguing over whether it’s okay to stomp on a woman’s head. Let me tell you what this country needs to move on from.

Let me also tell you where fascism comes from. I realize that Tim Profitt was one troglodyte acting alone, but the country is full of troglodytes. American political discourse has traditionally not tried to harness their power. We say that our opponents are wrong, or sometimes even that they are scoundrels, but we do not say that they are trying to destroy America. We say taxes are too high, or even that the present tax code is immoral, but we do not call the present government an unconstitutional tyranny.

We do not, like a recent email from Tea Party nation, explain “Why We Must Destroy Liberalism.” We do not claim that our opponents are evil, or that we need to protect America from the “treason” of those who disagree with us politically. Politics is serious, but the threat posed by political disagreement is not existential. It’s rhetoric like that that makes men like Tim Profitt flirt with beating a young woman. And it’s men like Profitt who could turn the Tea Party into America’s first serious attempt at fascism.

Since its inception, the Tea Party has emphasized commitment over discourse. They came to prominence as a national organization dedicated to disrupting debate at health care town hall meetings, and they attract a kind of person who—to put it charitably—loves his politics more than he thinks about them. The Tea Party does not want to argue; they want to grow. As the self-proclaimed party of God and country, they seem increasingly of the opinion that theirs is the only conscionable opinion.

Such people are dangerous. Forget Sharron Angle’s “Second Amendment solutions” and Steve King’s talk of secession. There is a grassroots movement in this country of ordinary people who are willing to stand up for mainstream values by wrestling a 23 year-old woman to the curb and stomping on her head. Maybe Lauren Valle could have talked them out of it by citing the vital American tradition of civilized disagreement. Or maybe, if enough people had cheered, Tim Profitt would have stepped on her head again. Maybe the Tea Party will become so popular that we can all admire them from the curb.