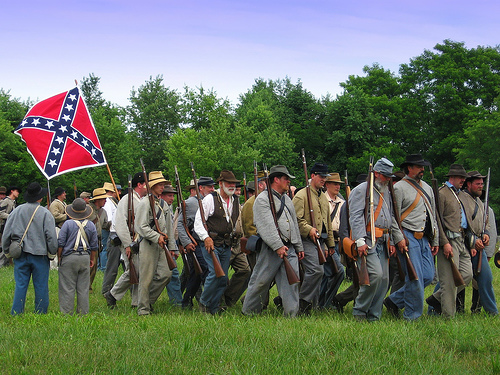 Our ancestors did not have public opinion polls and therefore knew what their fellow Americans thought only through conjecture. If the country was building railroads and allowing the Irish to consume rock candy, people seemed happy. If they were arming themselves and claiming sovereign authority against the US Constitution, they were pissed. The past was a terrifying time, but it was made more palatable by the fallibility of any given assessment. Sure, back in 1861 it seemed like A) thousands of Americans were willing to die so that other Americans could own a third group of Americans as slaves, and B) everyone was therefore retarded, but maybe it was states’ rights or tariffs or something less awful. Now, of course, we enjoy no such comfort. Telephones and computers and Wharton graduates have allowed us to peer into the opinions of our fellow citizens with chilling comprehensiveness, and the chilling comprehension that results is, yeah, other people are dumb. Super dumb, as suggested by this CNN poll in which one in four Americans expresses sympathy for the Confederacy over the Union in the Civil War. Of course, they might just be contrary dicks. You can guess which sort of person I like better.

With the help of the Opinion Research Corporation, which I bet is a really not-depressing place to work for the first six weeks, CNN contacted “824 adults via telephone” and asked them which side they preferred in the Civil War, whether they admired the leaders of southern states, and what the primary cause of secession was. While 52% of Americans said that Confederate leaders seceded to keep slavery legal in their states, 42% said slavery was not the main reason. One in four preferred the Confederate cause to that of the Union—a number that rose to 40% among white southerners. Meanwhile, 80% of Republicans expressed admiration for the leaders of the southern states.

That number is exciting since, as CNN points out, it’s almost exactly the percentage of Republicans who supported the North during the actual Civil War. Lincoln would be extremely displeased with the Party of Lincoln, once he stopped screaming at the sight of jet-propelled aircraft and Chinese women wearing trousers. Exactly how the Republican Party came to stand for exactly the opposite thing that it used to stand for, in exactly the opposite proportion, is a troubling question that we fortunately do not have to answer here. Because I submit that this poll does not tell us what Americans think about the Civil War so much as how we think about history.

Specifically, we think of it as a species of politics. Any schoolchild will tell you that the Civil War was caused by slavery, and slavery is proof positive that the United States is a historically racist place. You can talk about political correctness and reverse discrimination all you want, but the fact remains that for the first hundred years after the Revolution—and for a good hundred before it—it was legal for white people to own black people in America. This presents a problem for anyone who wants to argue that A) middle-class white people are the victims of an unjust American system, and/or B) the early history of the United States was its best period.

These two propositions are central marketing strategies for the contemporary Republican Party. Defending slavery is obviously not, so arguing that the Civil War was fought over states’ rights or northern hegemony in federal tariff legislation allows the GOP to disconnect is nostalgia for a white-dominated historical America from American history’s ugliest expression of white dominance. They want the scars but they don’t want the war, as Craig Finn says. If secession can be about federal tyranny instead of, you know, white tyranny, then the Republican narrative can be about the little guy resisting entrenched power instead of the other way around.

Of course that is not true. The Civil War and virtually every North/South or Republican/Democrat conflict leading up to it—including the Tariff of Abominations, the admission of Oregon as a state, the Great Compromise, the Mexican-American War, the Lecomte Constitution in Kansas, the trial of William Lloyd Garrison and a dozen more essay topics, if you want ’em—were about slavery. It was an extremely important issue, as a bunch of guys getting their legs sawed of at Gettysburg would tell you, along with a bunch of other guys gradually inventing syncopated vocal music.

Now it is not of such pressing interest. Slavery is still a big deal, but it is a big deal to the modern person in a different way than it was to those who could take a steamboat down to Mobile and see some slaves. Like everything else that isn’t dangerous anymore—popular music, tattoos, antigovernment protest—it is therefore a medium for personal expression. I’ve got five bucks says that if Jefferson Davis ran for governor of Alabama, 80% of Republicans would not actually support him. That they are willing to say they would is a testament to the degree of bullshit in American politics, but it also tells us something about the degree of safety. Mississippi is still a good place to find racist pricks, but it’s worth noting that 150 years ago, they declared war on the federal government. In that light, jerkoff answers to a public opinion poll seems like good progress.