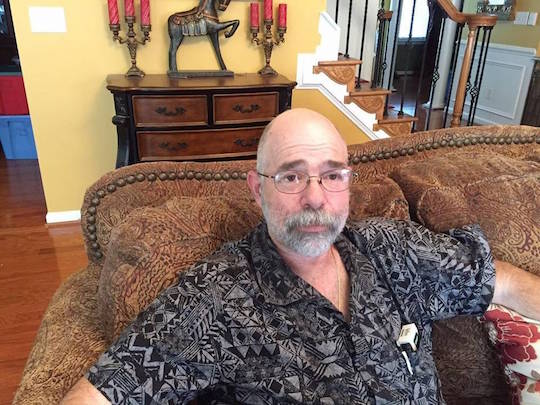 Luis Lang has a detached retina and bleeding in his eyes due to complications from diabetes. He needs a series of expensive injections and eye surgery, or he will go blind. A critic of President Obama, he refused to buy health insurance until late February, when he incurred $9,000 in emergency room bills. That’s when he tried to buy a policy through his state’s exchange and learned that he’d missed the 2015 deadline. He and his wife blame Obama and Democrats for passing a flawed, confusing bill. “[My husband] should be at the front of the line, because he doesn’t work and because he has medical issues,” his wife told the Charlotte Observer. “We call it the Not Fair Health Care Act.” First of all, I am sorry for Lang’s health problems, which are scary and bad. Also, he appears to be kind of an asshole. But does that mean we should let him go blind?

We should note here that the Langs are not poor. They live in a 3,000 square-foot house valued at $300,000. Lang contracts with local banks and the federal government to maintain houses under foreclosure, and he’s made enough money that his wife hasn’t had to work. By his own admission, the problem was not that he couldn’t afford health insurance. He just chose not to buy it. He’s also a smoker, and he told the Observer that he has been “inconsistent in his efforts to control his diabetes.”

These choices seem particularly unsympathetic in the context of his politics. Lang violated federal law and refused to buy insurance because he disliked Obama and the Affordable Care Act. Then, when he got sick, he tried to sign up for Obamacare and declared its deadlines and subsidy policies unfair. It appears that he opposes big government and believes in personal responsibility except insofar as it applies to him.

So should we let him go blind? Even if we accept that Lang is an asshole who brought this problem on himself after we passed a federal law to keep him from doing so, it seems unsatisfying to let him languish. The procedures that would save his sight are readily and regularly performed for the people who can pay for them. Lang’s refusal to buy insurance is egregious, but should the punishment for poor judgment be blinding?

Even if you believe that the most compassionate system must periodically withhold compassion for the greater good, there’s a quantitative policy argument against denying Lang care. As his doctor notes, “it’s extremely costly to let a person go blind.”

Once Lang can’t see, he will qualify for federal and state disability programs. Ironically, taxpayers in the United States and South Carolina will spend a lot more on Lang’s blindness than they would have spent on the operation to prevent it. You can say Lang doesn’t deserve a free eye operation now, but after he goes blind, he’ll get free insurance plus disability payments, plus whatever services and subsidies our governments provide to people who can’t see.

So denying Lang treatment on the grounds that his problems are his own fault won’t just punish him; it will also punish the state by adding someone with a preventable disability to the welfare rolls. Denying Lang care doesn’t have a practical upside: he goes blind, and we support him, his wife and probably their giant house for the rest of his life. The only upside is that we do justice. Or, rather, we avoid doing the injustice of helping someone who doesn’t deserve it.

I submit that everyone who could be helped deserves it. We should pay for Lang’s eye treatments, either by giving him insurance or by just giving them to him for free. Like his diabetes, his assholishness is a condition he has managed poorly that the state cannot correct. But we absolutely have the power to stop him from going blind.

Personal responsibility is not an option in this situation. It would be nice if letting Lang go blind would encourage other people to buy health insurance and stop mindlessly opposing programs that help them, but it won’t. It’ll just increase the number of blind people by one. What we have here is a flawed system serving dumb people. That’s pretty much the essential condition of democracy. But we should not take the flaws in our system as an excuse for cruelty. You have to be kind to foolish people, because they cannot do it for themselves.