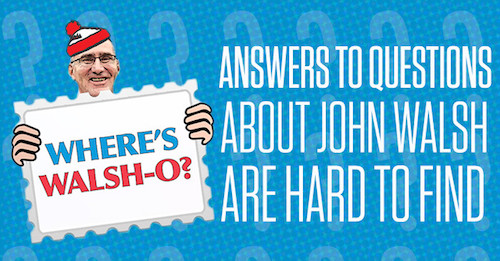 The Departments of Defense and the Army will exercise final review over accusations of plagiarism against Sen. John Walsh (D–MT,) according to Army War College spokeswoman Carol Kerr. Walsh is a sitting lawmaker and veteran, so the DOD has claimed jurisdiction over any investigation. This news caps a confusing couple of days for the AP, which also reported that the War College claimed final authority. If the War College revokes Walsh’s master’s degree, it’s hard to envision a situation in which Defense can plausibly restore it. Any other punishments, though, appear to be up to the Pentagon, which I’m sure will not do anything weird or biased in the end. While we wait to see how much our military procurers care about academic honesty, you could read my column for the Missoula Independent, in which I excoriate Walsh and his relentless ineptitude. Yes, he fought in a war, but we’re not electing someone to send to Iraq. We’re electing someone to send to Washington, and I cannot believe that Walsh is the best option among a million Montanans. At this point, though, we’re choosing the best option between him and Steve Daines. I’m not encouraging voters to stay home on election day, but I am urging voters to build time machines and get nominated in 2013. Anybody.