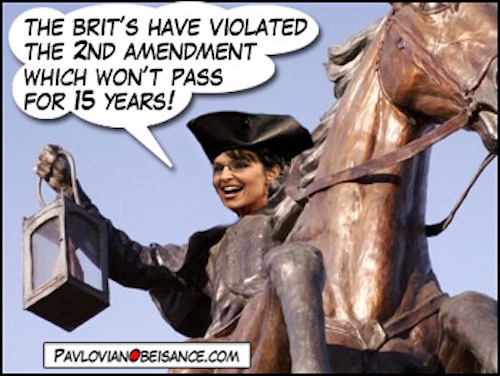 Combat! blog occasionally experiences Quantum Leap-style transports to the recent past, in which, through the magic of the internet, our attention is whisked away to some story that happened a week ago, and we must watch helplessly as events unfold without our being able to influence them. You know, just like the show Quantum Leap. More often than not, the center of these events is Sarah Palin, probably due to our original traumatization watching Joe Biden completely fail to call her a cheap courtesan during the 2008 Vice Presidential Debate. I still don’t understand why that didn’t happen, but the point is that you might remember when Sarah Palin mis-described the legendary Midnight Ride of Paul Revere last week. Before you go jumping down her throat, remember that Palin only made that mistake because she cannot think. The important thing is not whether the self-appointed president of Real America can accurately describe well-known events from the nation’s history. The important thing is whether her supporters can alter Wikipedia to make her remarks appear accurate afterward.

Here’s Palin explaining who Revere was at a bakery in Boston:

As you can see starting at about the :18 mark, when Sarah Palin describes American history, she takes on the same demeanor many women her age use to explain that, no, you’re the one who’s had too much to drink. This version of history is not accurate, of course. Revere rode to warn the countryside that British soldiers were moving on Lexington and Concorde to seize munitions and capture colonial leaders, including Samuel Adams and John Hancock. He did not ring bells to warn the British of some garbled message concerning guns and freedom.

Since Palin finally got the American press to fact-check one of her assertions, however, her supporters have been hard at work finding ways for history to conform to the meandering quasi-sentences she uttered while waiting in line for pie. Most of the scholarship here focuses on the account Revere wrote of the evening three years later, in 1778, in which he describes his capture by the redcoats and subsequent attempt to keep them away from Lexington, where he believed Adams and Hancock were quartered. Here he did warn the British, albeit not by firing guns or ringing bells or while riding on a horse. Also, the colonists were British! So obviously, Palin’s remarks were accurate and taken from a primary source document she had presumably read on the bus that morning.

A look at the Wikipedia talk page for Paul Revere reveals a massive, poorly-sourced effort in the last week to make this narrative the master one, at least among materials that high school students plagiarize to create study guides. What makes this development so frightening—besides the appearance that, not content with stupefying themselves, Sarah Palin supporters have now turned to making the rest of us dumber—is the approach to history it reveals.

History is a bunch of stuff that happened. That there was a dude named Paul Revere and that one night he was riding around the greater Boston area is damn near irrefutable, but why he was riding—and why that dude doing that thing was important when thousands of other people were doing equally real but unremembered things in New England that night—is the product of a narrative. That narrative is itself a synthetic structure emerging from the facts: we look at all the stuff that happened along the east coast of North America between 1763 and 1789, and we call it the American Revolution, with subset Midnight Ride of Paul Revere. Really it’s just a jumble of events including woodchuck death and inconsequent plays and other causal noise, but we filter out these irrelevant details to identify our Revolutionary History.

The problem is that when we teach Revolutionary History, we present the events as a product of the narrative and not the other way around. We tell kids that there was an American Revolution, and it happened around 1776, and things like Sam Adams and the Midnight Ride of Paul Revere and the Growth of Tavern Culture are important because of it. This is a good way to teach—you wouldn’t want to force sixth graders to memorize decontextualized facts all year and then tell them about the Revolution in May—but it instills the almost subconscious perception that events are expressions of History. Really, it’s the other way around.

The danger of this notion of events as expressions of history is that it encourages us to ignore—or try to change—those facts that don’t fit with our accepted narrative. This is extraordinarily dangerous, since we’re also willing to change our narratives, as Palin demonstrated. I quote from her Fox interview the following Sunday:

Once you’re willing to change the narrative to suit whatever and change the facts to suit the narrative, your whole history has lost stability. You have to have at least one fixed point. For Palin, that point appears to be whatever she just said. The rest of history can orbit around it. We should be careful not to adopt the same approach, lest, like her, we wind up very important and knowing nothing.