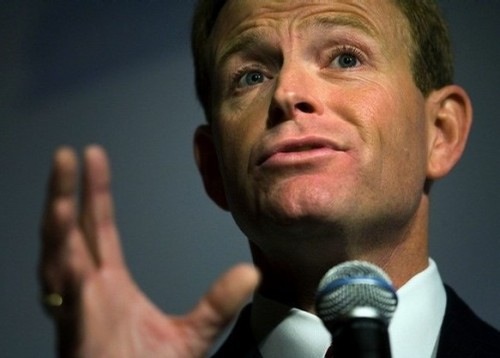 "Not even a little bit. Never. Not once. Why do you guys keep asking me this? Is it my lips? I know I have expressive lips."

Perhaps you’ve heard, but yesterday a district court judge issued an injunction that stops the enforcement of Don’t Ask Don’t Tell, thus A) ending decades of homophobic discrimination in the US military and B) reminding everyone that Congress isn’t the only damn branch of government. Tony Perkins is pissed. The Family Research Council President and lifelong crusader against gay rights, who is definitely not a homosexual, said in a public statement that “once again, an activist federal judge is using the military to advance a liberal social agenda.” First of all, I hope this doesn’t interfere with Mr. Perkins’s research. Second—”once again,” Tony? Let’s look at previous instances of judges using the military to advance a social agenda.

June 12, 1948—Congress passes the Women’s Armed Services Integration Act, allowing women to serve in the Army, Navy, Marines and brand-new Air Force, although they are not allowed to serve in combat.

July 26, 1948—Harry Truman signs Executive Order 9981, integrating the US armed forces and mandating equal treatment and opportunity for all servicemen, regardless of race, religion or national origin.

July 1963—Secretary of Defense Robert S. McNamara issues Directive 5120.36, requiring military commanders to foster an atmosphere of equality and nondiscrimination, both on bases and in nearby areas over which they might exert influence. The order essentially required officers to oppose discriminatory practices in housing, restaurants and clubs near military bases.

April 29, 2010—The Department of the Navy authorizes women to serve on submarines, ruining what is perhaps the most language-economic dirty joke of all time.*

So, um, it turns out that “activist federal judges” had nothing to do with the US military’s gradual acceptance of blacks, women, and other instruments of the liberal social agenda. My original plan was to show how Tony Perkins’s “once again” referred to some of the most important civil rights gains in American history, but it turns out that he was just fabricating a statement of fact from whole cloth. Once again.

The other “once again” in this saga is that, once again, a professional bigot has found himself slipping out of the majority. Like Orval Faubus before him, Tony Perkins used to enjoy agreement with mainstream American values. As recently as 1996—when Perkins got the Woody Jenkins campaign fined by the FEC for hiding money he paid to David Duke in exchange for the Ku Klux Klan’s mailing list, seriously—he could count his persecution of homosexuals as a political credit. Whether he was winning elections in Louisiana or acquiring a paid position in an organization whose stated purpose is to protect the practice of getting married and having a kid, Perkins has built his career on popular prejudice.

Except his signature prejudice suddenly isn’t so popular anymore. Urging 97% of the electorate to legislate against 3% used to be a golden political strategy for Perkins, but the tide of public opinion has turned. Perhaps most tragically, there’s no clear explanation why, except that people like Tony Perkins evidently haven’t been doing a very good job. Somehow, even though the percentage of gay people has not significantly increased, “unite them against the gays” is no longer a viable tactic. Given the trajectory of his career, Tony Perkins must feel confused and disappointed right now.

Perhaps that’s why he’s obsessed with presenting his own view as the majority one. Besides the consistently refuted “studies” produced by the FRC, Perkins has never really argued for his views, probably because they are based entirely on prejudice. That prejudice has become Perkins fundamental rationale, and his rhetoric has relied primarily on the appeal to popularity. Consider his response to the suspension of DADT:

This move will only further the desire of voters to change Congress…Americans are upset and want to change Congress and the face of government because of activist judges and arrogant politicians who will not listen to the convictions of most Americans and, as importantly, the Constitution’s limits on what the courts and Congress can and cannot do.

Never mind that Congress had nothing to do with this decision and, in fact, explicitly declined to repeal DADT this summer. Perkins’s assertion that he’s right because “most Americans” agree with him is both logically invalid and evidentially unsound. In fact, most Americans support the repeal of Don’t Ask Don’t Tell. For a man who rose to prominence by saying what most Americans would agree with, and who used his position of power to start an advocacy organization for what most Americans believe, the news must be crushing. Once again, Tony Perkins is out in the cold. But at least he has the fire of his convictions.