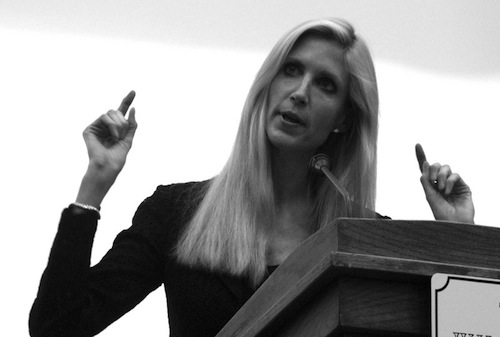 Ann Coulter pauses briefly because she thought she heard a strain of music, far away, sung to a little girl who doesn't live here anymore.

During this country’s innocence (Thriller—2008 A.D.,) Ann Coulter could reasonably be called the most unreasonable commentator working. The woman who titled two books about liberals “Treason” and “Godless” could once be relied upon for the most incendiary quotes and the most absurd exaggerations, but the climate of discourse has changed. Coulter, like O’Reilly, finds herself a weak sister in conservatism’s Thanksgiving dinner of nutjobbery, overshadowed by such relentless word-combiners as Glenn Beck and Michele Malkin. Suddenly, she is only middling crazy. Worse, her hyperbolic shtick has become standard not just for conservative commentary but for conservative politics. In a country where Joe Wilson screams that the President is a liar while he is addressing Congress, what is an Ann Coulter, exactly? The answer, at least as suggested by this profile in the New York Times, is “weirdly lonely and sad.”

Last month, Coulter spoke at Homocon, the one-year anniversary gathering of the gay Republican group GOProud. It was an odd engagement for a woman who opposes gay marriage and publicly called John Edwards a “faggot,” but it also made perfect sense. Promotional materials for the event called Coulter “the conservative Judy Garland,” which A) is true and B) suggests that she has a certain camp value.

Ann Coulter is not to be taken seriously. That wink has always been part of her routine, but it seems to have unnerved her to see it come from the audience. Early in the article, she delivers a quote that is the equivalent of watching Charlie Chaplin peel off his mustache:

I’d be disappointed if liberals did not spit their drinks out when they heard my name. That’s kind of what I’m shooting for. But that does not relate to the reality of me. It relates to me creating a reaction in godless traitors.

“Godless traitors” are, if you’re wondering, us. Less clearly defined is “the reality of me”—an Ann who apparently exists behind the Coulter and is not fully consonant with the last twenty years of her public life. Ann Coulter is that kind of person, strangely common in conservative commentary, who makes a distinction between what she does and who she is. Although she professionally goes on television and into convention

halls to talk about what she thinks, what she really things is apparently something else. She is just creating a reaction.*

In this light, Coulter’s situation becomes an ironic advertisement for the principle, “make sure to say things that you believe are true.” On one hand, she’s become rich and famous by ignoring it. According to the Times, she “lives mainly in Florida, but has apartments in New York and Los Angeles, where she has a network of friends with whom she dines and debates politics.” It’s cool that Coulter has three homes, but her friends are also a “network” of people who live in different cities with whom she sometimes eats dinner and does the thing she does for work—which, see above, is not really her. “Mainly,” she lives apart from this network of friends, and even her brother doesn’t know her phone number.

“I’m kind of like Jack Nicholson in The Shining,” Coulter told the Times. “It’s a little bit weird how utterly, laughably solitary I am.” One gets the feeling she laughs about it a lot, especially at 4 a.m. on Tuesdays when she has just finished a column. That’s when, according to the article, she mails a draft to a dozen friends she calls “the circle of deciders,” whose input she frequently ignores. “Whenever I have hysterical messages on my answering machine telling me not to release my column, I think, ‘This is going to be a good one,’” she told the Times.

Maybe it’s the answering machine part, but I don’t think she is telling the truth. I think that when she listens to a series of fervid voicemails from her friends urging her not to keep doing what she does, Ann Coulter finds herself briefly in “the reality of me.” I think that in that moment when she tells herself that it’s good because it gets a reaction out of people, she also must wrench her friends into the category of “people from whom I’m just getting a reaction.” It’s nice in Florida and all, but I imagine that at 4 a.m., even in your third house, it’s kind of cold and dark.