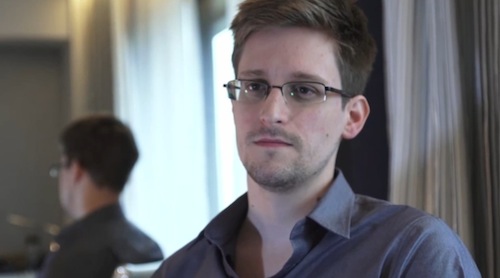 The New York Times announced today that, contrary to earlier assurances from the executive branch, the NSA is looking at the contents of large numbers of Americans’ emails. Don’t worry, though: they’re only looking at emails and text messages that originate or are received overseas, and they’re only searching for information related to specific targets. The word “target” appears in an alarming number of reassurances about this program. While we’re trusting implicitly the institutional structures of America, there’s also this paragraph from the Times report:

Hints of the surveillance appeared in a set of rules, leaked by Mr. Snowden, for how the N.S.A. may carry out the 2008 FISA law. One paragraph mentions that the agency “seeks to acquire communications about the target that are not to or from the target.” The pages were posted online by the newspaper The Guardian on June 20, but the telltale paragraph, the only rule marked “Top Secret” amid 18 pages of restrictions, went largely overlooked amid other disclosures.

Which is understandable, because why would journalists notice the one marked “Top Secret?”

Crumbling of the fourth estate aside, this disclosure is alarming for several reasons. Back in June, for example, the House Intelligence Committee asked NSA Deputy Director John Inglis whether the NSA read the emails of US citizens. “We do not target the content of US person communications without a specific warrant anywhere on the earth,” Inglis said.

It turns out he was only misleading the House Intelligence Committee, not lying to them, because of the word “target.” According to former Bush and Obama administration official Timothy Edgar, the FISA court ultimately approved a rule requiring that one party in a read email conversation be outside the United States, so that the “target” of the operation is technically on foreign soil. The NSA can still read the domestic side of the email, and in fact may only be interested in that side, but for the purposes of rules about who can be surveilled it is incidental to the investigation.

The policy is intellectually dishonest at best. Rather than looking for ways to avoid reading Americans’ emails, the NSA seems to be looking for ways to read as many of them as possible while still abiding by the rules. That many of the rules and their interpretations to justify the NSA’s behavior are secret only adds to the sense of general mendacity. And then there are statements like this:

In carrying out its signals intelligence mission, N.S.A. collects only what it is explicitly authorized to collect. Moreover, the agency’s activities are deployed only in response to requirements for information to protect the country and its interests.

That’s NSA spokeswoman Judith Emmel, ostensibly answering a question about surveillance of cross-border communications. Her remarks would make George Orwell proud, by which I mean they risk making him burst out of the ground and consume our soft brains. The sole content of sentence one is that the NSA is allowed to do what it does: “in carrying out…its mission,” Emmel says, the NSA collects “what it is explicitly authorized to collect.” Note the passive voice, which disembodies authority even as Emmel insists the NSA has it. Then she adds that “” the agency acts “only in response to requirements for information.”

So the NSA is only reading your emails when it needs to know what’s in there. I assume that after releasing this cloud of verbiage, Emmel darted into a crevice and changed colors. Or she returned to an executive branch that has misled congress about the extent of the secret domestic surveillance program that we only know about because it was leaked by a nerd who is now wanted for treason.

Which brings us to the big, unanswerable question yet again: is it worth it? Is our massive, privacy-eroding, multibillion-dollar terrorist catching machine so indispensable that we shouldn’t even know about it, much less criticize it? And are the unknown but presumably real safety benefits of said machine more valuable than the civil liberties we have lost?

I totally care about those civil liberties in principle. In practice, though, I am not so alarmed at the prospect of NSA interns reading my emails to Mose. What I do not like is the sense that the executive branch is so confident it knows best as to feel no need to make me aware of historically unprecedented decisions. I don’t like that it has separated the public from the judicial portion of government that is supposed to check its power. And I don’t like that it has misled the legislative portion that is supposed to balance it.

Suddenly, I trust the feds much less than I used to. That is the worst outcome of this whole fiasco: for whatever good reasons, the executive branch has put the American people in a situation where we must assume we don’t know everything it’s doing, even when it’s doing it to us. In the area of trust between the government and the people, I consider this the worst cock-up since Watergate.

Maybe all this erosion of the American Way has prevented another 9/11. But I don’t think Osama Bin Laden’s goal was to kill 3,000 people. I think it was to inject fear and mistrust into our society—into Americans’ relations with one another, and into our relations with our government. Given what the NSA is doing now and how the executive branch has responded to its public disclosure, I can only say that he won.