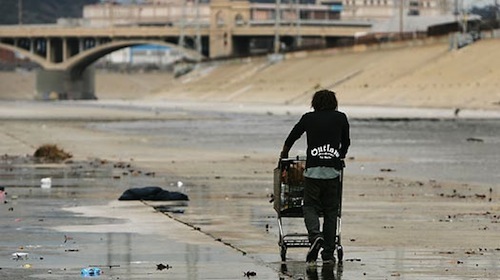 Observant readers might notice that didn’t work. Herein lies the genius of the Times budget puzzle, which eschews rhetoric of all sorts in favor of a series of yes-or-no questions that move you toward or away from a big blue number. Love the MV-22 Osprey, which you claim is vital to our brave men and women et cetera, a la Judson Phillips? That’s cool—you’ll just have to tell your Tea Party Nation about your plan to raise the retirement age and/or increase the capital gains tax. It’s a simple choice, and you’ll notice there’s no box marked “appeal to patriotism.”

The Times deficit puzzle highlights the difference between politics and government. Where the ultimate goal of politics is to construct a compelling argument—a goal that someone achieves every election cycle, regardless of how crappy the general field of ideas may be—the goal of government is less reliably attained. Unlike arguments, choices come with conditions, in a limited number and in limited combinations that work. Maybe that’s why we’ve managed to successfully vote for Hope, Getting America Moving Again, Change, Reform, Honest Government, A Return to Normalcy, Fiscal Responsibility, Morning in America, a Strong Economy and Living Within Our Means for 100 consecutive elections, all the while racking up a $1.3 trillion dollar budget shortfall for 2030.

Clearly, America has a discipline problem. Left to our own devices, we have collectively decided to argue in favor of lower taxes and balanced budgets, while speaking passionately in defense of virtually everything we spend money on. This “I want it/I don’t have to pay for it/Why are we in debt?” mentality is at odds with any sense of long-term responsibility, yet it’s a killer argument in the context of any given election cycle. Anyone who knows much about developmental psychology will recognize this type of reasoning: it’s how adolescents think, and it’s why they’re not allowed to decide for themselves whether they want to attend school. Their ability to plan is fatally biased toward the short term.

I submit to you that our current political discourse employs an adolescent mentality. We’ve mastered the art of crafting a simple message—it’s the deficit, stupid—but our ability to define and make choices in pursuit of long-term goals has withered. The question of whether to extend the Bush tax cuts for households making over $250,000 a year, for example, should never appear in public without the question, “Okay, where else are we going to get $700 billion?” Such a dialogue would require a more complex discourse that synthesizes related issues—here we are back in adolescent skill development—and resists simplification in a hyperkinetic media, which might be why we prefer to remind each other that we’re Mama Grizzlies and leave it at that. One way or another, though, we’re going to need to come up with a trillion dollars or so in twenty years.

The Times puzzle reminds us that we’re not going to convince our deficit to go away. The deficit does not care which of us are real Americans. It does not support our troops. It does not believe in the hard work of the small business owner, nor is it subject to the blessing of God. It just wants 1.3 trillion dollars, and if it doesn’t get it, it will be happy to turn over operation of America to the Chinese and/or various leather-clad motorcycle warlords. That’s an entirely possible outcome that is also entirely preventable. We just have to make a few choices. Or we can sit around and make arguments, content that we never compromised our principles until the very end.