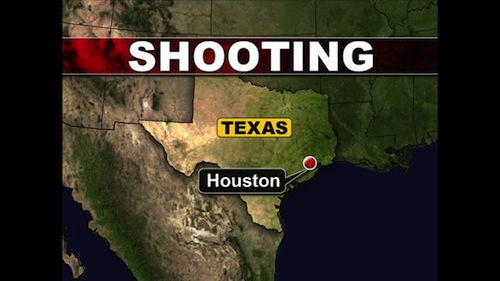 Pretty much a guide to America, courtesy of Houston’s ABC 10

For my money, the most amazing paragraph in the New York Times‘s account of yesterday’s shooting at Lone Star College is the last one, about a teacher administering CPR to a woman who seems to have collapsed in panic:

As Mr. Thomas was trying to revive the woman, she told him that she was more frightened than the others. She said she had survived the Virginia Tech shooting. “She said, ‘I went through this already at Virginia Tech, and I just don’t like this feeling.'”

Now there’s a robust analog. America has become so rattled by the recent string of arbitrary mass shootings that we can’t even handle regular, one-on-one gun violence.

Really it was more like one-on-three. The consensus account is that Carlton Berry, 22, got in an argument with another man on the Lone Star campus and fired multiple shots, hitting both his antagonist and a nearby maintenance worker, who was shot in the leg. Berry also seems to have shot himself—in the buttocks, according to USA Today.

This, too, is a robust analog. You will forgive my flip compression of history if I say that America has loaded up on guns, gotten angry and shot itself in the ass. Gun control advocates can only hope that Berry got his pistol legally. He’s in Texas, so probably however he came by it is fine. Regardless, he used his weapon for pretty much the exact purpose a handgun is intended—to settle a fight—and he still botched it entirely.

Here is where intellectual honesty compels us to introduce the argument that guns don’t shoot a college student, a janitor and Carlton Berry; Carlton Berry shoots a college student, et cetera etc. The problem in this story is not the handgun. It’s the 22 year-old jerk who loses his temper and/or picks a fight, then proceeds to fire his handgun with the accuracy of a toddler urinating off of a tricycle.

Agreed that this story would not have happened if not for Carlton Berry. I could probably walk across the Lone Star College North Harris campus with the same weapon in my pocket and not shoot two other people plus myself. Yet if we shift the question from the NRA-approved What caused this? to the more expedient How can we prevent this?, Berry becomes a moot point.

Yes, he was the proximate cause of the shooting. He is also the element that is hardest to do anything about. In the grand scheme of what we Americans can achieve as a society and as a government, preventing 22 year-olds from getting really angry is not going to happen. Carlton Berry is a given. The nation is full of angry 22 year-olds, just as it is full of disturbed loners and street-level drug dealers and 12 year-old boys who want to see something cool. If we want to stop them from shooting people, the innocence of the guns they use is orthogonal to the problem.

In the big national conundrum of gun violence, which strikes you as a more workable policy solution?

One of these solutions is legislation, and the other is a utopian society. It so happens that one also has a powerful lobbying group dedicated to opposing it, where the other is a list of goals everyone can agree on. That gives a strong rhetorical advantage to Item (1), whose only drawback is that it is utterly impossible.

I refer you to our earlier theory about muddying the argument and who benefits from nobody doing anything about gun violence. In a different world, we could ban the people who kill and/or injure people with guns. In this world, where such people are a given, maybe we should consider reducing the number of guns we offer them.

That might be unfair, just as it is unfair to install loud smoke detectors that wake up innocent people when the real problem is fire. But we are talking about an actual problem that exists in this world, not a rhetorical game, and the first step toward doing something about it is to identify what we can actually do.

Also, I don’t think that lady was at Virginia Tech in 2007 and Lone Star College in 2013. New York Magazine says it’s true, but the same account also describes yesterday’s shooting as “majorly disruptive and scary.” Majorly, you guys.