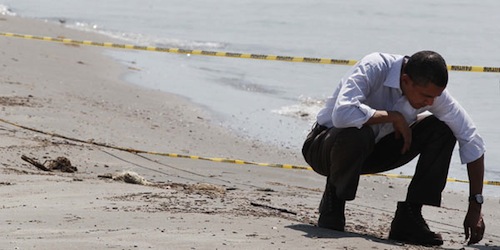 Whatever you do, do not accidentally type "DP spill" into Google image search. I cannot emphasize that enough.

As the Gulf of Mexico slowly fills with crude oil and burned-off dolphin faces, forcing executives of British Petroleum to move their extra houses to the Pacific coast, an increasing number of Americans are putting the blame squarely where it belongs: on President Obama’s emotional experience. At least that’s what the news tells me. While attempts to cast the Deepwater Horizon spill as Obama’s Katrina foundered on the rocks of that makes no goddamn sense at all, the narrative that the President has displayed insufficient anger at the disaster has found a lot more traction. “Since The BP Oil Spill Began, President Obama Has Been Trying to Convey Presidential Action and Concern; But Is He Showing Enough Emotion?” CBS News asks.*

Aside from the baffling meta-semantic demand that the President “convey Presidential action,” CBS pretty much captures the signature elements of the narrative. First, the President can’t really do anything. Second, if he doesn’t act more pissed off, people are going to think he doesn’t care. It’s an argument that presumes that Obama’s response to the disaster is reasonable, and also that people are too stupid to recognize it as such.

Certainly, some people are. Consider Meghan McCain, who is to politics as Forrest Gump is to the Vietnam war: she has no idea what’s going on, but her innocence sometimes provides a useful distillation. In a piece entitled “Obama’s Oil Spill Insanity: Stop Partying With Kelly Clarkson!” Me-Mac wonders how the quote-unquote mainstream media would respond to the disaster if there were a Republican in the White House. She then offers as her own opinion the mainstream media response. “I know Obama has made it clear that he is ‘furious,'” she writes. “He did so by stating on Larry King Live that he is ‘furious,’ even if that fury doesn’t seem to be conveyed through his raw emotions. Still, I also know I wake up every morning with anxiety.”

The message, here, is that Me-Mac is super worried that no one can do anything about the Deepwater Horizon spill, and she’d feel a lot more like someone was doing something if the President lost his temper. To borrow a technical term from Cicero, that’s a retarded argument. It calls for a display of emotion that it simultaneously regards as pointless, which turns out to be a key element of the “Obama isn’t angry enough” narrative. The speaker and the auditor know that whether the President seems super-mad is immaterial, but both assume the rest of the country will be taken in.

That element probably explains why most articles on the subject advance the narrative while simultaneously refuting it. It’s not that Obama getting angry would improve conditions in the Gulf—that’s absurd. It’s that Americans believe it would. Exactly who these Americans are—besides Meghan McCain and other professional conservatives so committed to agreeing with middle America that they will embrace any story of popular opinion, real or imagined—remains unclear. Presumably, they’re the same vast swath who believed Obama was too clinical and emotionless during the 2008 election, right up until they awarded him a landslide victory over a famously ill-tempered war hero.

The emergence of this bizarrely self-referential narrative reflects a phenomenon in modern political reporting, by which the salient question is not “Is this course of action correct?” but “Is this course of action politically expedient?” It stems from the admirably postmodern attitude of objective journalism, which substitutes assessments of public sentiment for value judgments. In theory, that leads to better reporting. In practice, however, it allows reporters and editorialists to advance arguments that they themselves find ridiculous.

Making the story of Obama’s insufficient anger into a disembodied narrative absolves us from taking any responsibility for it. We don’t have to believe the idea that Obama should be angrier at BP; we just have to repeat it. As a self-contradictory, prima facie valueless argument that A Lot of People believe, the notion that Obama’s biggest mistake in addressing the BP disaster lies in his ability to “convey presidential action and concern” save us from thinking about what he should really do.

The answers to that question are depressing in the extreme. BP, which has become the largest energy company in the world by pioneering the field of petroleum drilling and exploration, can’t figure out how to make oil stop pouring out of the earth. The Republican Party, which until 50 days ago was chanting “Drill baby drill!” and claiming that environmental regulation is morally wrong, has found an oil drilling platform at the center of the largest ecological disaster in US history. The President, who must fend off simultaneous accusations that he is a socialist and a lackey to corporate interests, gets to pay for BP’s mess or mortally wound the world’s fourth-largest corporation in the midst of a global economic crisis.

No wonder we don’t want to confront this situation. Better to discuss how imaginary people think about the President’s facial expressions than what we might actually do. That question, caught as it is between our national addiction to oil and our relentless lip service to environmentalism, forces us to argue from the one position no one finds tenable: responsibility.