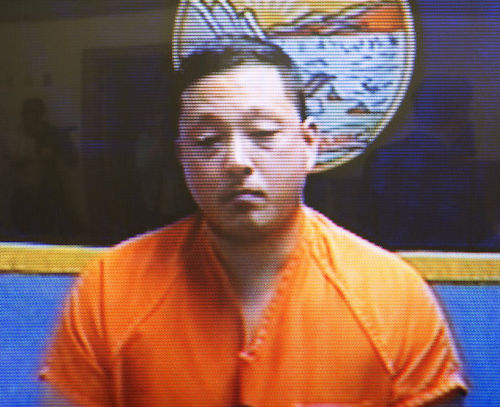 A Missoula man who baited his open garage with his wife’s purse and told his hairstylist that he was waiting up nights to “shoot some [fudging] kid” has been charged with deliberate homicide in the death of Diren Dede, 17. Dede was an exchange student at Big Sky High School. According to Kaarma’s wife, Janelle Pflager, the couple set up motion detectors and a surveillance camera in their garage in the hopes of catching burglars who had previously stolen phones and credit cards. They left the garage door open and left Pflager’s purse visible inside “so they would take it.” When the motion sensors went off late Sunday night, Kaarma fired four times with a shotgun into the darkened garage, in what police called a “sweep pattern.” He aimed high so as not to hit his car.

He took the steps that no one wants to take and shot. It wasn’t his intent to kill because he didn’t know who was in there, and where the person was, and what was in the person’s hands as far as weapons. It was a split second. It happened very quickly, and unfortunately a young man lost his life.

The claim that he didn’t intend to kill is similarly nonsensical. By all reports, he raked his darkened garage with shotgun fire because he know someone was in there. That he didn’t know specifically whom he was killing is A) immaterial to the homicide charge and B) improbable, given that he had just seen Dede on camera.

The larger question, though, is how far we are willing to take the Castle Doctrine. Formalized in Montana law in 2009, it has already produced some controversial cases, including the Kalispell shooting of another unarmed man in the shooter’s garage. Brice Harper was not charged in that incident, but his situation differed from Kaama’s in two important respects.

First, Harper had reason to believe that the man he shot, Dan Fredenberg, might cause him serious bodily harm. That element makes the difference between a Castle Doctrine and a law saying you can just shoot whomever on your own property, and it is ambiguous in Kaarma’s case. While Fredenberg followed Harper into his garage during an argument about his relationship with Fredenberg’s wife, Kaarma ambushed Dede from the driveway. If we are to believe his attorney’s claim that he didn’t know who was in his garage or what was going on, we must greet with skepticism the claim that he reasonably believed himself to be in danger.

Second, Harper did not lure Fredenberg into his garage. Surely there is some difference between killing a burglar who has broken into your home and killing one who walked into your garage to pick up the purse you left there to attract burglars. At what point have you made your home so enticing to intruders that you essentially set up a murder trap? Here the statements of Kaarma’s hairstylist are instructive. From the police affidavit:

He told (the stylist) that he had been burglarized a few times, that was why he was waiting up at night to catch someone and shoot them. (She) reported that the defendant was being extremely vulgar and belligerant. She asked the defendant to quit swearing and he said he could say ‘whatever the (expletive)’ he wanted.

These reported statements suggest that it was not Kaarma’s intention to protect himself. You might argue that he intended to protect his property, but he did not take any non-lethal steps to do so. He appears to have deliberately placed his property in jeopardy, and all so he could get the opportunity to shoot somebody.

He did. We are obviously still in the early stages of this affair, and surely new facts will come out, but there are a lot of indications so far that Kaarma’s actions were not an invocation of the Castle Doctrine so much as deliberate abuse of it. Maybe this case will encourage Montanans to think about potential problems with the law and whether we really want it on the books. Maybe at this stage in our society, we don’t need to make it more okay to kill people.