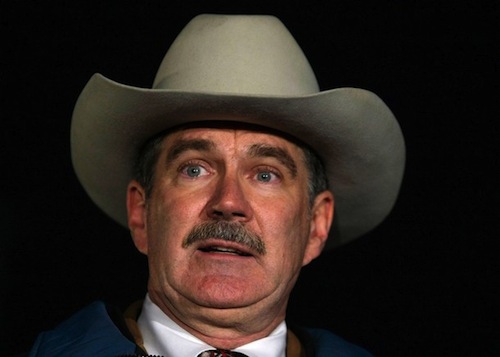 Not that there’s anything wrong with that. It’s perfectly understandable that a US congressman would get fake news from unreliable sources and try to influence policy accordingly. How could he be expected to know what the federal government actually does, what with that damn Obama? Quote:

“The Obama Administration rarely reveals its secretive plans to anyone but its closest allies. Since Denny doesn’t vote with the President 95 percent of the time, he must often rely on news reports and constituent input,” wrote Jed Link, Rehberg’s spokesman. “In this case, Denny heard from concerned Montanans, saw reports in the media and took the responsible first step—asking the EPA about it.”

In retrospect, one might think that the responsible first step would be to check and see if what one read on Infowars-dot-damn-com was actually true. But we don’t think that way about news—at least, not yet. Until the end of that last sentence, I had not checked to see if this whole Rehberg drone story was actually true, though it is in fact corroborated by other reliable sources. Like most people of voting age, I did not grow up with Infowars and Fox News and other deliberately misleading sources of information about the world around me. When I read something that is presented to me as news, my default position is to think it is real.

Even I maintain a healthy skepticism toward Fox News, however, and I’ll be damned if I’m going to slog through the semi-retarded prose and naked insanity that is Infowars. In this aspect of internet savvy, I probably enjoy an advantage over a 56 year-old rancher from rural Montana. On the other hand, I am not a US congressman. I feel that in access to information about what the federal government is doing, we should at least be equal.

1) In a just world, this drone thing would cost Rehberg his re-election. Not only did he try to influence federal policy based on some bullshit he read on the internet, but he also issued a press release about it. Ignorant plus self-aggrandizing should not equal legislator.

2) This story is a concrete example of how the decline of journalistic ethics—or the rise of utterly ethics-free writing that has been mistaken for journalism—hurts America. The time Denny Rehberg spent reading made-up information, trying to get the EPA to stop doing something it doesn’t do, and then spinning it might have been used to, I dunno, make some laws or something. At least he could have read something true, or maybe even a novel. Functionally, the hours this congressman devoted to changing a fantasy world are analogous to time spent incapacitated by illness. Thanks, Alex Jones!