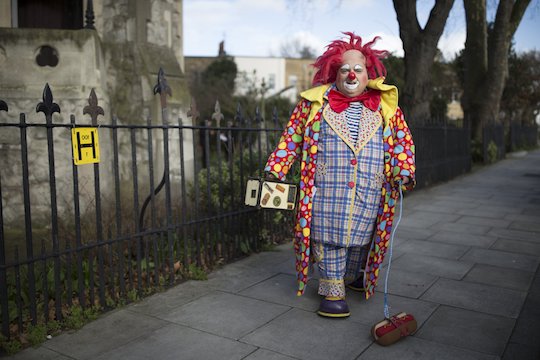 My god, he’s WALKING THE DOG!

As of press time, Missoula schools no longer live under threat of violence originating from clowns. The ZooTown Klown has been not just apprehended but unmasked, as a 15 year-old boy screwing around on Facebook. It was the thrilling conclusion to a story in three acts—act one, in which the county informs parents of clown-related threats, and act two, in which the police remind residents to please not just attack clowns, many of whom are “reputable professional entertainers.”

Setting aside the question of how many professional clowns Missoula can support, I think we should put the blame for this hysteria squarely where it belongs:  society. Sure, it’s social media’s fault for ushering in a golden age of hoaxes. And it’s teenagers’ fault for simulating clown-themed terrorism on Facebook. But it’s our fault for making that funny.

Over the last 15 years, our culture has become so fixated on safety that it’s no wonder teens are teasing us. We have made identifying and protect ourselves from perceived threats the only sacred element of American life. Teens must overthrow all that is sacred.1 In this sense they resemble satirists, who exaggerate the foibles of their times. Our time’s most protruding foible is fear. You can read all about this wild, totalizing theory in this week’s column for the Missoula Independent, which also contains many clown jokes. We’ll be back tomorrow with Friday links!