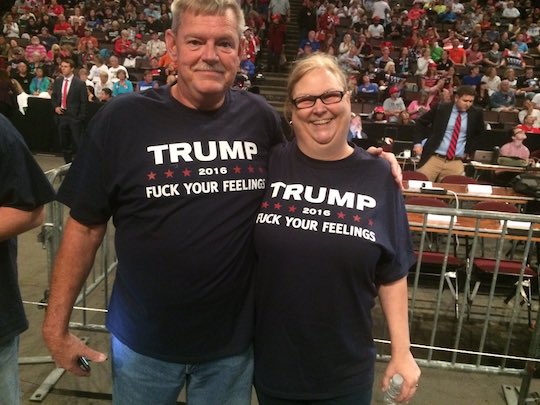 Supporters of a frothing demagogue suggest you are ruled by your emotions.

Now we come to the late stage of democracy, where we support the political system but feel the urge to save it by eliminating all people involved. The demos is not having its best year. The Republican nominee for president of the United States, Donald Trump, has whittled down his constituency to voters who do not care what he says or does—about 40% of the electorate, it turns out—and is now holding them up like a surgeon who pulls a tumor out of your chest to marvel at how big it is before you die. Hillary Clinton is Plato’s philosopher king compared to this maniac, but she remains the second most-disliked candidate in American history. She also remains the only major-party candidate who is not a groping, racist game show host. Today is Friday, and approximately 60 million people believe that man should be president. Won’t you fuck your feelings with me?

First, the good news: Trump is not going to win. The bad news is he’s begun telling his supporters the election is rigged. Here he is one hour ago:

By “this whole election is rigged,” he means the media is covering him unfairly. You’ll notice he delegitimizes first and explains second, though. Earlier this week, he told a crowd in Pennsylvania the election could be “stolen” from him and urged them to monitor polling places in Philadelphia. That sounds kind of like he’s telling his supporters to intimidate black people. Perhaps he is only laying the groundwork for a future in which he tells himself he won. It would be nice, though, if he had not selected for this edifice of self-delusion the former site of our confidence in the electoral system.

Here, for example, is Ken weighing in on the hacked nude Jennifer Lawrence pictures:

“Maybe she should have been more careful with her pics, but the bad guys are still the ones who sought them out and looked at them. By which I mean guys like me. I saw her butt hole. I liked it.”

That’s so gross that you can almost imagine Donald Trump saying it. Lawrence herself has said of the stolen images, “Anybody who looked at those pictures, you’re perpetuating a sexual offense. You should cower with shame.”

Is it just me, or are these not the words of a monster? They’re embarrassing, and Mr. Bone should not have looked at those pictures. But he knows he shouldn’t have looked at them, and is not only capable of admitting that but also refuses to excuse himself with the bullshit argument that it’s Lawrence’s fault for letting them leak. We’re going to pillory him for guiltily admitting he looked at celebrity sex pictures? I guess this is what you should expect when they love you for wearing a red sweater.

It’s times like this when I retreat from current events into fantasy. What I need right now is Hollywood’s dream factory, where thrilling stories and daring artistic vision give form to our deepest and most powerful emotions. Or we could just skip those first two things and maximize element three. Sony Pictures Animation is hard at work on Emojimovie: Express Yourself, a film about the symbols Tinder dates use to lower your expectations. The plot:

Anthony Leondis is directing the story that takes place in Textopolis, a bustling city where all your favorite emojis live, hoping to be selected by the phone’s user. In this world, each emoji has only one facial expression — except for Gene (Miller), who was born without a filter. Determined to become “normal,” he enlists the help of his handy best friend Hi-5 (Corden) and the notorious Jailbreak (Glazer). Together, they embark on an epic “app-venture” to find the code that will fix Gene. But when a greater danger threatens the phone, the fate of all emojis depends on these three unlikely friends who must save their world before it’s deleted forever.

Textopolis! What will they think of next? Fucking nothing—that is literally the last thing anyone involved in this movie ever thought. I still love Ilana Glazer, but she is really testing the elasticity of my fandom here.

You know I’m not going to leave you with that kind of despair. Society was never a product of its denominators, its common men and women, its democratic averages. Everything good in this world is exceptional, and it is the product of people who self-nominated as special by doing exceptional things. One such person is David McCraw, lawyer for the New York Times, who responded to Trump’s lawyers’ threat of lawsuit with this sharp letter. I can’t prove it, but I suspect one David McCraw counts for 100,000 people who say “get over it” and believe D. Trump tells it like it is. They will never win. They will enjoy our good society and marvel at how stupid we are for making it.