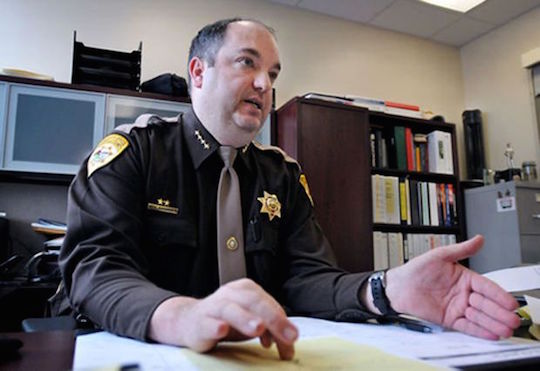 Missoula County Sheriff TJ McDermott, who has never been photographed with Banksy

Good news, everybody: a Human Rights Bureau investigation has found that Missoula County Sheriff TJ McDermott really did discriminate against former undersheriff and political rival Josh Clark. Wait—that’s not good news at all. Nor is it good news that McDermott offered no comment on investigator Josh Manning’s report, which included this paragraph:

The investigator was troubled throughout this process by the petty personal attacks both parties used to color the way the Bureau would look at the people involved and left those details out of the report. It did not paint a good portrait of the people responsible for the public safety of one of Montana’s most populous counties.

The report also notes that the two deputies McDermott promoted to captain upon taking office were the two largest donors to his campaign. The sheriff referred all questions to his lawyer, County Attorney Erica Grinde, who said they would withhold comment until the matter had been resolved. From an outsider’s perspective, though, the conclusion of the HRB investigation looks a lot like resolution—at least a resolution of the question, “Did the sheriff do that thing he said he didn’t do?” Yeah—it appears he did. He should at least acknowledge that the outcome of this investigation is significant by talking to reporters about it.

If this leads to some kind of settlement—and it almost certainly will—then it will be the fourth settlement for political discrimination the sheriff’s department has paid out in the last two years. One of them went to McDermott himself, in 2013. It seems like maybe this county agency is operating on the spoils system. You can read all about it in this week’s column for the Missoula Independent.

After you read that, why don’t you bop on over to the New York Times Magazine and read my essay about Banksy, sarcasm and kitsch? That’s the actual good news today, and I’m very excited about it. I think this one captures something I’ve been trying to articulate about how we use the word “sarcasm” online, be it in news-aggregator sites, memes, or Ok Cupid profiles. I think sarcasm is our kitsch. That’s the kind of statement I consider bold and exciting, but maybe the internet is not as concerned as I am with our emotional relationships to various categories of art. Still, “Banksy and the Problem With Sarcastic Art” is total clickbait. Click it up, sluts. Why don’t you try sharing it, so we can both be smug early adopters when it goes viral?