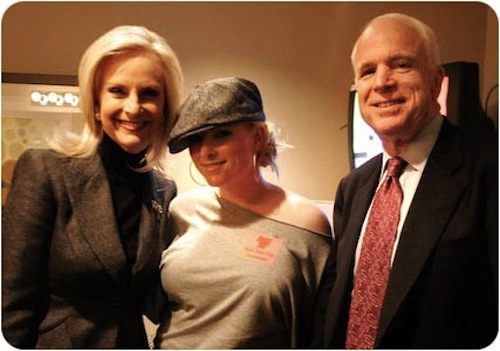 Remember yesterday, when we mentioned the ideological purity test that has become so popular among Republicans? Of course you don’t. Just because you’ve forgotten doesn’t mean that it ceased to exist, though, or that it didn’t recently vindicate perennial victim  Meghan McCain. The latest entity to unjustly persecute Me-Mac—after Michelle Malkin, Karl Rove’s Twitter account, and her own boobs—are the George Washington University College Republicans, who recently pulled their sponsorship of her upcoming campus speaking engagement. According to McCain, it’s because her support for marriage equality violates one of the tenets of Republican purity, although it might also be because she’s an idiot. The GW College Republicans can all go sit in their Audis and eat dicks now, though, because Meghan McCain took the purity test, and she totally passed! First of all, if you want to talk ideology with Meghan McCain, it’s best to present it in a form that she already understands from Facebook. Second of all, despite being proud of her ideological purity, Me-Mac is sick of all the labels. Her planned speech at GW promises to induce confused grimaces right from the title, which is “Redefining Republican: No Labels, No Boxes, No Stereotypes.” See, Meghan McCain thinks beyond words like [actual words not supplied] when she thinks about what words like “conservative” and “Republican” mean. As she points out, that puts her in a hunted minority, since “apparently some student organizations feel more comfortable being able to group all Republicans into one place.” You know, like a political party.

If you’re like me, when you hear that Meghan McCain passed some kind of test over which her father the senator and her mother the millionaire had no influence, you want to read it right away. It turns out the first four most important elements of Republican purity involve being against specific bills supported by the Obama administration, which lends credence to speculation that Reagan himself wouldn’t have passed. “What the fuck is a Baracco Bomber?” President Reagan would have said, before falling asleep with his elbow dangerously close to the jellybeans. He was the Great Communicator, which is how he narrowly avoided being the Great Nuclear Annihilator, but I digress. My point is that the notion of conservative purity so fashionable in the GOP at this moment is, in a very limiting sense, of this moment. What is being presented as a corrective return to values is a 10-point platform whose first four points are articulated in opposition to a man who has been president for one year. That seems short-sighted at best, and disingenuous at worst.

Part of the problem is that American conservatism has, generally, been organized around class. Republicanism—not to mention Federalsim and Whig-ism—is the province of the rich, and of those middle-class business owners who plan to become rich. While one sees the occasional gazillionaire Democrat—John Rockefeller IV and the Kennedys leap to mind—one rarely finds a poor man in the ranks of the Republican Party. Or at least one rarely did, until the 1980s and the Reagan Revolution for which these purity tests consistently pine. The Reagan era is now remembered in terms of the policies enacted while the Gipper was in office, but the actual Revolution was a matter of politics, not government. The genius of the Republican Party under Reagan was that it found a way to sidestep the class issue, by incorporating evangelical Christianity (not to mention racism) and other elements of so-called “social conservatism” that were traditionally the province of the rural underclass. Where American conservatism’s position had historically been “It’s your fault you’re poor”—not tremendously appealing come November—under Reagan it became “It’s their fault you’re poor.”

“They” were generally tax-and-spend Democrats, illegal immigrants, or people with no moral compass, all of whom are well-represented in the purity test. At root, the ten questions are a document of longing for the Reagan era, when the country poor, the elderly and other people who would be getting welfare if welfare were just a little more widely available were united in their support for the people bent on cutting entitlements.*

For all its Puritan dogmatism, the Republican purity test is a symptom of nostalgia for the Big Tent—when the GOP was a much more flexible party, united not by class but in its resentment of a common, largely imaginary enemy.

As an old-school Class Republican, it’s no surprise that Meghan McCain is against the purity test. Her conservatism is literally inherited, along with her money and her absurd position as a political commentator. How could Meghan McCain not be a Republican, regardless of her political views?Her dad was the party nominee for president, for chrissake, and she’s never cashed a welfare check, gotten a college scholarship or worked a day in her life. In the same way that Republican opposition to cap-and-trade undercuts their claim to be in favor of free market solutions to social problems, Meghan McCain’s Republicanism gives the lie to the notion that the GOP is anything but an influential club for rich people. It doesn’t matter that she passed the purity test or that she supports gay marriage; her party affiliation is a function of her class, and no amount of actual politics or governance will ever change that.

Here’s a fun question: How come there’s no great family of Republican politics, the way the Kennedys are the great family of Democrats? Surely a party that has dedicated the last twenty years to repealing the estate tax can find some use for nepotism. I think it’s because American conservatism, in order to ever have any hope of winning an election, has organized itself around one central fiction: that it is an ideological and not a practical position. For all their talk about the efficiency of markets and the sanctity of the individual and the institutions that have made America great, conservative thinkers always arrive at the same three solutions: cut taxes for the rich, deregulate business, stop giving resources to the poor. Say what you will about the increasing similarity between the millionaires on the left side of the aisle and the millionaires on the right, at least the Republicans don’t have to compromise between their politics and their personal interest.