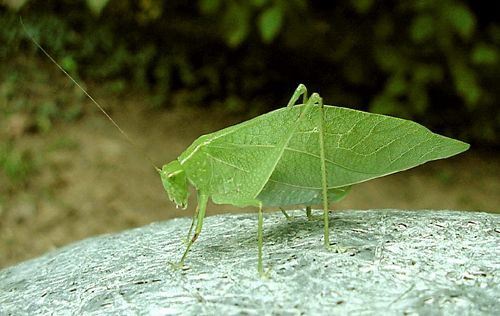 Yesterday was a hectic day around the Combat! blog offices, as we moved into an exciting AirBnB on East 6th Street normally occupied by a young woman who loves the Misfits and hates to dust. Did you sleep last night beneath an enormous Die, Die My Darling wall hanging? Because I sure did. Before that, though, I ate Japanese curry with Tommy and Laura. On my way home, I found a bug.

It was a katydid—not the one pictured above, but still pretty much identical. It fell out of one of the big elm trees on 6th, along with a gust of actual leaves, and landed in front of me. I executed the same bug protocol I employed as a kid, which is to put my hands near it and wait for it to crawl onto them. Probably, I looked kind of crazy. Fortunately I was in New York, where my particular set of eccentricities is considered bland.

I twisted my arm at a weird angle to show a passing stranger, briefly concerned that he would be the kind of stranger who wants to seize and further twist your arm. He was not. He was a homeless man, albeit one so clean and together that he was not immediately recognizable as such. I normally do not initiate conversations with homeless people on the street. My eccentricity runs only so far.

It was a katydid, but I was not about to say so. A lifetime of picking up bugs and showing them to people has taught me that such behavior is accepted only insofar as you act like you’re doing it for the first time.

Of course it’s a damn katydid, I excoriated myself. I had just met this person, and already I was lying to him. But the katydid was doing that slow, uncoordinated walk they do, extending its legs and bending them at experimental angles as if they had just been attached, and we watched it work its way up my arm.

“He looks like a leaf!” the homeless man exclaimed. It was a thrilling insight for both of us. The katydid jumped off my arm and collided with a garbage can enclosure, dropping to the sidewalk. It landed approximately four inches from the man’s left foot.

“That was cool, man,” the cool homeless man said. “Thanks for showing me that.”

He looked down at the katydid and shuffled away from it a little, looking both frightened and concerned. He made absolutely no move to reach for it, but he also did not take his eyes off it.

“You got to pick him up,” he urged. “Somebody will step on him.”

So I picked up the katydid again, using the aforementioned hands-nearby method. After a little more scientific inspection and some discussion about what should be done, we agreed to put the katydid back in the tree. While the homeless man directed pedestrian traffic around me, I crossed the sidewalk and held my hand against the elm tree until the katydid climbed aboard. A less remorseful punster might say it embarked.

“What’s it doing?” the homeless man said. “Did it go back in the tree?”

He was about two feet away, squinting. I said it did go back in the tree and was working its way upward steadily. Really it was doing nothing and looked like it might be seized by a rat with a good vertical leap. But that was nature’s problem now.

“You saved him,” the homeless man said. “You’re a good Samaritan.”

After some consideration, the homeless man said, “We thought of it together.”

He reiterated that katydids were cool and shook my hand. Like a lot of homeless people, he had a good handshake. Then he thanked me again and headed east down 6th Street. We were about 50 feet from my apartment, but it seemed weird to walk behind him after we had said goodbye, so I went the other direction. The homeless man called down the street to me.

I gave him some change. It was the first time I had given someone money on the street in maybe a year. I felt nothing. It was like we were both at work, getting it over with.

“All right,” he said, shaking my hand again. “Keep an eye peeled for bugs.”

I went home and thought about that guy, who is somewhere in the city right now. He is doing something or holding still. He sees things. He wonders what will happen next. He is out there, in the same way that katydid is somewhere among the thousands of leaves rustling outside my window. I brushed my teeth and stopped to cry a little, and then I went to sleep.