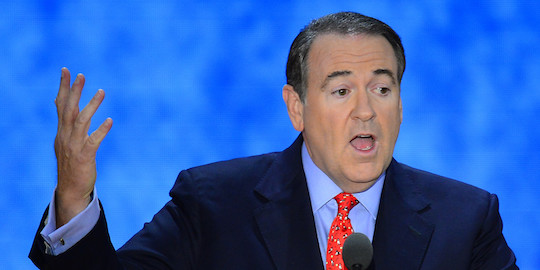 On Friday, an evidently deranged man in Colorado Springs killed three people and injured nine others in an armed standoff with police at Planned Parenthood. “No more baby parts,” a senior law enforcement official reported him as saying. It appeared to be a reference to a series of undercover videos shot by an anti-abortion activist in which Planned Parenthood administrators discussed fees associated with the donation of fetal tissue for research. Or, as Carly Fiorina described it in a nationally televised Republican presidential debate:

“Watch a fully formed fetus on the table, its heart beating, its legs kicking while someone says ‘we have to keep it alive to harvest its brain.'”

That video doesn’t exist, you can’t abort a “fully formed” fetus, and no one ever said that about harvesting a brain. But she was just describing something she felt strongly about, in terms that, if they were true, would probably justify armed intervention.

It’s a popular position in the GOP that abortion at least justifies shutting down the US government. Before Friday, congressional Republicans were talking about refusing to pass any budget package that included funding for Planned Parenthood. That’s why John Boehner resigned. His successor, Paul Ryan, has not ruled out a shutdown scenario. None of the federal money that goes to Planned Parenthood can be used to pay for abortions, and only a small number of clinics turn over fetal tissue for research—but still, basically, Planned Parenthood sells baby parts.

A fetus is not a baby, of course. That’s why abortion is legal. We already have laws against infanticide, so saying Planned Parenthood kills babies is like saying your local veterinarian is cutting off family members’ testicles and putting them to sleep. But rhetorically, if not explicitly, it has become the stated position of Republican candidates that abortion and infanticide are the same thing. Here’s the Hill quoting ordained minister Mike Huckabee:

Given the widespread condemnation of Friday’s deaths, Huckabee says it is “a little bit disingenuous on the part of Planned Parenthood to blame people who have a strong philosophical disagreement with the dismembering of human babies and with the selling of body parts.”

If you’re wondering what “disingenuous” means, consider the gap in meaning between “abortion” and “dismembering babies” or between “donating aborted fetuses to researchers” and “selling body parts.” That’s where disingenuousness lives. In the four decades since Roe v. Wade, anti-abortion rhetoric has inflated to fill that gap, creating a continuous surface between a woman’s constitutionally assured right to terminate her pregnancy, upheld by the US Supreme Court, and “the dismembering of human babies.”

If you thought Planned Parenthood was a building where they pulled apart babies and sold their brains, why wouldn’t you go in there with a gun? And if you got your understanding of abortion from Huckabee and Fiorina, why wouldn’t you think that?

Huckabee, Fiorina, and the other candidates who traffic in anti-abortion rhetoric don’t want you to shoot up a Planned Parenthood, of course. They want you to vote for them. You might be disinclined to vote for the candidate who promises to make you raise a child with your one-night stand from six weeks ago. The candidate who promises to make your sister marry the boyfriend who beat her up because she forgot to take her birth control pill may not be your first choice. “Make college sophomores drop out an be single moms” is a bad slogan. “Stop the dismembering of human babies” is easier to agree with.

Such rhetoric did not cause Friday’s shootings. But making abortion tantamount to murder—calling a medical procedure “dismemberment” and calling fetuses “babies”—makes murder tantamount to abortion. How, exactly, is shooting 12 adults different from dismembering a dozen babies? If fetuses are babies and the doctors who abort them sell the body parts in a for-profit genocide, what action to stop it isn’t justified?