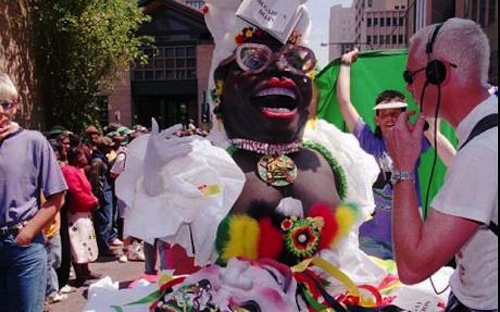 An effigy of Robert Mugabe in Johannesburg’s Gay Pride parade

Yesterday in the comments, Willy pointed out that a lot of people think the @ZANU_PF Twitter account is fake. “Fake” in this context means “not originating from officials of ZANU-PF”—the ruling political party of Zimbabwe headed by dictatorial octogenarian Robert Mugabe—and in this case it is mostly an aesthetic judgment. Back in April, @ZANU-PF seemed to be fueling rumors of Mugabe’s death, an odd choice for the mouthpiece of a party that spends a lot of time insisting its leader is totally healthy. The use of the appellation Cde (for comrade) before everybody’s name seems like something out of screwball comedy, too. Then again, the previous president of Zimbabwe was named Canaan Banana, so who knows what the fudge is going on?

Hard evidence is tough to come by. You can’t get an IP address from a tweet, and Twitter only appends location data as an opt-in service. @ZANU_PF has not opted in. Many of their tweets come from an Android device, which seems to weigh against authenticity until you realize such reasoning is hideously racist. Robert Mugabe can get a nice phone. In the absence of definitive proof, we are forced to go with our gut—our intuitive sense of what an aging caudillo running the populist party of a third-world nation would sound like.

It is a system vulnerable to error. At the Atlantic, Max Fisher was initially taken in but now feels that certain early tweets from @ZANU_PF—which have since been deleted—are “so outlandish” that the account must be fake. Most articles in the skeptical camp link back to his piece or the GlobalPost/Three Men On a Boat stories, both of which also rely on subjective judgments. Such assessments are compelling. When @ZANU-PF issues a comically racist tweet about its indigenization policy, one feels winked at.

Yet one must also acknowledge that the entire @ZANU-PF-is-fake story rests on one blog post and one article from a news organization founded three years ago. By comparison, the New York Times—which was founded in 1066—quoted @ZANU-PF as the voice of Mugabe’s party as recently as two weeks ago. The Australian Broadcasting Corporation did the same thing in April, then recanted and said that @ZANU-PF was a hoax.

The ABC offers no explanation for that conclusion, but they don’t have to. Journalism played according to Hoyle assumes that anonymous sources are unreliable until proven otherwise, and Twitter is anonymous. Plenty of people tweet as their real selves, but plenty more operate under pseudonyms. Until international journalists have a compelling reason to believe @ZANU-PF does emanate from Mugabe’s offices in Zimbabwe, they should treat it is as highly suspect.

In this way, the state of being a principled journalist mirrors that of being a savvy internet user. John Q. Browserwindow should operate as if none of the identities/concepts/events he encounters on the internet are real, lest he believe that hot singles in his area actually do want to meet him. The era in which anyone can disseminate news to his neighbors has necessarily led us to adopt the attitudes of the people who once disseminated the news—or at least it should. Otherwise, the internet is simply a tool we invented to acquire and act on false information.

Either that, or it’s a machine for manufacturing cynicism. Too little suspicion of what we see on the internet is risky, but too much is deadening. A certain portion of the commenting community believes that pretty much all conceptual entities on the internet are fake and gay, reflecting a sort of universal skepticism that has proliferated as the authority of traditional news outlets breaks down. We think of credulity as the dangerous element, but consider the problem posed by obstinate skepticism in, say, the issue of Barack Obama’s birth certificate. At a certain point, the fear of fake becomes corrosive.

My personal assessment is that @ZANU_PF is probably not real. I am less interested in its provenance, however, than in what it tells us about our relationship to the primary communicative medium of our time. Even if I read reports that Mugabe held a press conference in which he updated @ZANU_PF’s Twitter personally, I could not be certain that he really did it. If I read about it on CNN.com, I would probably believe. If I read it on Infowars.com, I would be a little more skeptical. But these are gradations of credulity, and the truth is a binary thing. Claims are either true or they are not. I want them to be, at least. The United States is the country founded on an idea, and maybe fake/kind of true makes for a shaky edifice.