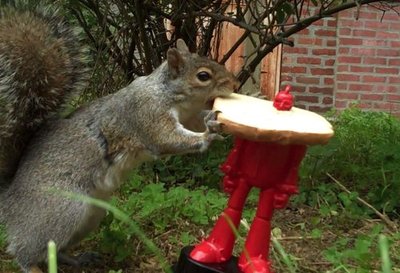 It’s Friday, the Mormon Day of Atonement and, traditionally, a time for the rest of us to consider man and his relationship to the sublime. There are two ways to look at the subject: either you think some genius woke up one morning, impaled a piece of Wonder Bread on a toy robot and strode purposefully into his yard, or you think that picture is the result of several trials with different foods and different pointy things. Here at Combat! blog, we maintain the illusion of divine inspiration. Really we have to do things the hard way, though, and on Friday we gather all the various internet gems that turned out to lack the fascinating luster of, say, a child’s board game. So sit back, turn on your cell phone camera, jam a piece of melba toast down on whatever body part seems like it will best support it, and wait for the magic to happen.

Those of you who regularly read Combat! blog—and there are like sixty of you now, which is frickin’ sweet; hit that Share button—already know about the rise in Militant Retardism currently threatening our great nation. From Bakersfield to Boston, the angry and uninformed are taking it upon themselves to remake America through yelling. What you may not have known is that many of them are armed, and have decided to reject the authority of the federal government, stop paying taxes and maybe murder some people. That’s what this report from the Southern Poverty Law Center says, at least. The SPLC uses the term “violent right-wing extremism” to describe the larger anti-government Patriot Movement, which ironically seems comprised of self-appointed “sovereign citizens” who deny the validity of our democratically-elected government. It turns out that being an American citizen doesn’t mean taking part in the noble experiment that is United States democracy; it just means being born in the US and owning a gun. (In the case of Barack Obama, that may not be enough.) The SPLC describes the gradual shift of organizations like the Minutemen—originally a vigilante group created to monitor illegal border crossings—toward a general anti-government platform that believes the present administration is secretly driving the country toward a fascist-socialist totalitarian system. Oh yeah—they also reject the authority of the judicial system, declaring themselves subject only to “common law.” They’ve got guns, they’ve got survivalist camps in the mountains, and they’re circulating a petition demanding that President Obama appear before an “American grand jury” to answer charges of treason. I’m sure they’ll give him a fair hearing.

So yeah—a significant segment of the country is stockpiling weapons, believes that the President is not an American citizen, and refuses to pay taxes. That doesn’t mean they’re extremists, though, and frankly RNC Chairman Michael Steele is a little offended by the term. The Tea Party people who gathered on April 15th to protest the existence of the Federal Income Tax, which has been a part of the Constitution since the Sixteenth Amendment was ratified in 1913, aren’t extremists. They just think the federal government should revert to the fiduciary system it used before World War I. Ditto for the guys showing up with assault rifles at the President’s public speaking engagements. These people are “great Americans,” according to Steele—and you know what? So is Sean Hannity. “I want to say you’re one this week,” Steele says, “for really putting alight the over 300,000 people out there who stood up for freedom, who stood up for their families, and stood up for their communities by saying no more, the line has been drawn in the sand, so congratulations for bringing that up to folks, man.” Michael Steele says “man” a lot, probably because the GOP is trying to reach out to “urban-suburban hip hop settings.” Then again, it might just be that he is an utter clown. Be sure to listen to the end of the clip when, after Steele has gotten offended by the suggestion that his position on health care is “nuanced,” Steve Inskeep says “Michael Steele is the national Republican party chairman,” in a somewhat incredulous tone of voice.

They didn’t give Steele that position because he knows a bunch of English words, though; they gave it to him because he’s willing to do stuff like this. Since the GOP has nothing to do with persistent rumors about death panels and a nascent socialist dictatorship, Steele was totally comfortable circulating a “Future of American Health Survey” containing the following question: “It has been suggested that the government could use voter registration to determine a person’s political affiliation, prompting fears that GOP voters might be discriminated against for medical treatment in a Democrat-imposed health care rationing system. Does this possibility concern you?” Seriously, you guys—people are talking about how Obama will take away your insurance and make it so Republicans can’t have medicine. I’m not saying it’s true; I just want to know if it bothers you. It has been suggested that the Republican Party is totally a legitimate political organization that participates responsibly in American governance for the good of the country, and doesn’t just incite fear in the mob. Does this possibility intrigue you?

Of course, the RNC isn’t the only source of completely inaccurate information that Americans will use to make decisions about national health care policy. There’s also Betsey McCaughey, the former lieutenant governor of New York who insists that H.R. 3200 will pay doctors based on how many of their patients agree to be euthanized. Take twenty minutes and watch her full interview with Jon Stewart on The Daily Show, in which Stewart demands to see the provision that McCaughey is taking about, then refutes her intellectually dishonest reading while McCaughey mugs shamelessly for the audience. I’m sure she knows what she’s talking about, though. Until last week, she was director of the Cantel Medical corporation.

It’s times like these that try Combat! readers’ souls, and if you’re like me, you can’t get through to Friday afternoon without making concrete plans to hit somebody. When you feel that righteous anger welling up inside you, though, do what any responsible American does: tamp it down and wait for it to come out the next time you and your girlfriend are drunk together. Need something to take the edge off until then? Try this: