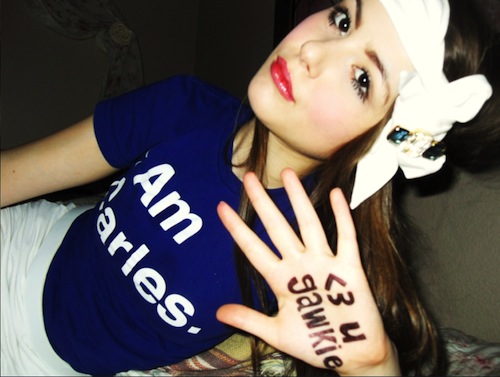 As literally every consideration of the subculture must now note, the hallmark of the hipster is his refusal to identify as a hipster. As with “grunge” and “yuppie,” that’s partly because the term is idiotically inclusive. Now that PBR and certain bicycles are hipster, it’s starting to look like an epiphenomenon. Yet if hipsterism is any way real, what’s real about it is the desire to live meaningfully in a way that is free from crass cultural influences—you know, like hipsterism. That’s the problem. You’re a hipster because you’re constantly looking for new, cool, untainted stuff, which means identifying inauthentic stuff and/or approaching that stuff from the safety of irony. As Steve Spillman puts it:

In a world fraught with multiple meanings, trends moving at the speed of light, and not enough language to capture it, Carles becomes (understandably) disappointed by irony. But, much like the langue of internet-speak, it’s the only thing he knows.

Irony is kind of the opposite of authenticity. Yet is is also the hipster’s—and really any thinking person’s—primary weapon against the inauthentic. That’s a problem, since irony is constantly being appropriated. Plus, things like MGMT that you like now might easily come to seem repellent, forcing you to ironize them later. Or you might still like them but watch other people turn against, in which case irony will allow you to keep consuming them while preserving a nominal authenticity. Basically, you can use irony on everything, to the point where you’re not even sure what you actually like.

And there lies the hipster’s dilemma. To be authentic, you must authentically like stuff. Yet the mark of the inauthentic masses, the not-hip, is that they like stuff that is not authentic. They think that “Lisztomania” is that song from the McDonald’s commercial, when really it’s that song everybody liked three years ago before we realized it was just bubblegum indie, as confirmed by its appearance in a McDonald’s commercial. We have to repudiate “Lisztomania” now, even if we still like it, which means our tastes are as much at the mercy of mass culture as everybody else’s. As Carles puts it:

These days, it kinda feels like indie music exists just 2 be used in commercials. Foster the People’s hit “Pumped Up Kicks” kinda makes us feel like there was never really any point in the whole ‘indie movement’ and the boring genre has been swallowed whole by corporate America. It’s a dark day now that one of the most beloved indie songs “Lisztomania” by Phoenix was used in a McDonalds commercial.

The joke here is that “Lisztomania” was never “one of the most beloved indie songs,” and that Carles is describing a phenomenon of disillusionment that has been happening at least since the Ramones. It probably started with Buddy Holly. For those of us who are horribly old, that may be the biggest reason for skepticism toward the hipster meme: it describes the exact same cycle of longing for authenticity, disillusionment and rejection that we saw with grunge, punk, and any other type of culture that posits itself against the mainstream. The difference is that in this age of the hipster, the mainstream/indie dichotomy is more false than its ever been. That’s why no hipster is a hipster: indie is fake, too.