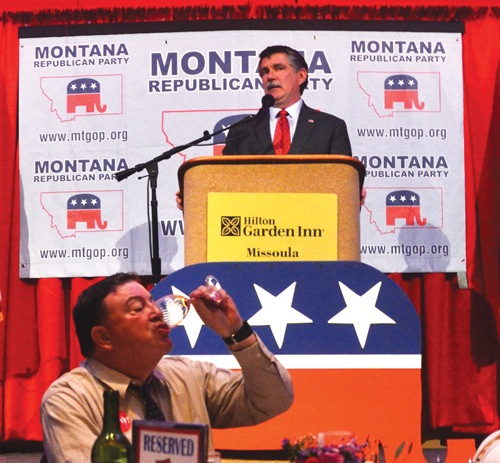 And I feel great about this picture of Denny Rehberg, courtesy of Steele Williams.

I do not feel good about my ability to meet today’s deadlines, and I was awaked at 3:15 by my neighbor’s favorite album, Repetitive Bassline Jams 4. So instead of reading my stupid opinions in this blog, how about you read MSOs in this week’s column for the Missoula Independent? It’s about Dennis Rehberg, our erstwhile congressman who lost his bid for the Senate in November and subsequently complained that Montana voters “bitch and moan” without ever changing anything. He is a rascal. He is also likely to become a lobbyist, so we shouldn’t feel too bad about losing his public persona. Teaser: on a diplomatic visit to Kazakhstan, he called the locals “coneheads” and fell off a horse. Rumors that he drank a dozen shots of vodka first are not substantiated.