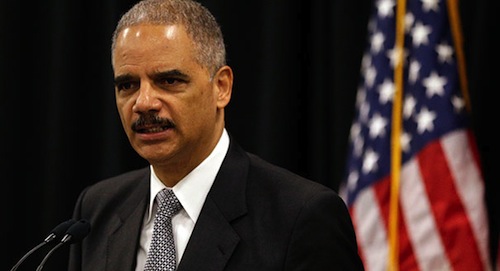 Attorney General Eric Holder is more likable if you refer to him as Crime Dog Eric Holder.

Yesterday, Eric Holder told the Senate Judiciary Committee that there is an airtight legal justification for using drone strikes to kill American citizens abroad, but it’s secret. Also, the Obama administration might use drones domestically. Holder was understandably reticent about when that second scenario might happen, prompting Senator Ted Cruz (R-TX) to pose two hypotheticals. Suspected terrorist “sitting in a cafe?” No, Holder believes that in that situation, a domestic drone strike would be unconstitutional. Suspected terrorist “pointing a bazooka at the Pentagon?” Yeah, Holder would light that dude up. It is fun that Ted Cruz maybe thinks of the Pentagon as the seat of US government. Otherwise, this exchange was dispiriting in the extreme.

First of all, can we stop using “suspected terrorist” as a synonym for “known terrorist” in all our hypotheticals? That kind of misses the point when we’re talking about the extrajudicial killing of American citizens. Second, and more importantly, the federal government is not allowed to have secret explanations proving that what the federal government does is legal. Everybody has secret explanations for their own behavior; those are called motives. The difference between a motive and a justification, particularly in government, comes when other people see your explanation and agree.

To be fair, the constitutional argument for the use of drones in targeted killings of US citizens is not entirely secret. The Obama administration recently showed it to the Senate Intelligence Committee, as part of its efforts to get John Brennan confirmed as head of the CIA. If the explanation were just a doodle of a turbaned man bursting into flames while a girl in a bikini clings to Holder’s leg, we probably would have heard about it. As it stands, there is an explanation for why the executive branch can incinerate American citizens with flying robots, but it’s too important for us to actually read.

I don’t like it, but I can think of a plausible reason why the federal government would not publish its legal justification for killing foreign nationals with drones. If Ayman Al-Zawahiri knew under exactly which circumstances we would and would not send a robot to murder him, he might adjust his behavior accordingly. I personally think we should extend foreign nationals that courtesy, but I accept that it might be constitutional not to. It probably requires treating the war on terror as an actual war and other premises that I don’t agree with, but I am willing to consider the possibility that the explanation holds water and needs to remain secret.

I categorically reject that possibility when it comes to American citizens, though. American citizens, including the ones who plan to point bazookas at the Pentagon, should know exactly when they are and are not eligible for drone strikes. If that allows thousands of domestic supporters of Al-Qaeda to game the system, adjusting their behavior so they are just barely not vulnerable to aerially targeted killings, then great.

Regardless of their views, we want American citizens to be able to confidently skirt the edge of what would permit the US government to kill them. To worry that they will use their knowledge of federal jurisprudence to avoid punishment is to start from the presumption that some Americans are the American government’s enemies. That assumption is antithetical to this country’s basic principles.

The rule of law is meaningless when those ruled don’t know what the law is. The Obama administration’s insistence that we trust a legal explanation we’re not allowed to read is tantamount to saying that it is above the law. If there is a compelling national security reason for hiding this explanation from the public, I would like to hear it. Until then, I suspect the reason is that the explanation is not very convincing, and now is not a good time for people to criticize the President.

It’s always a good time to criticize the President. Considering that our tax dollars recently cooked an American citizen and his teenaged son on said President’s orders, I would say that now is a particularly auspicious moment for criticism. Eric Holder runs the Department of Justice, and to claim justice without justification is simply to claim authority. The executive branch does not have such authority, and we should not accept its insistence that it does.